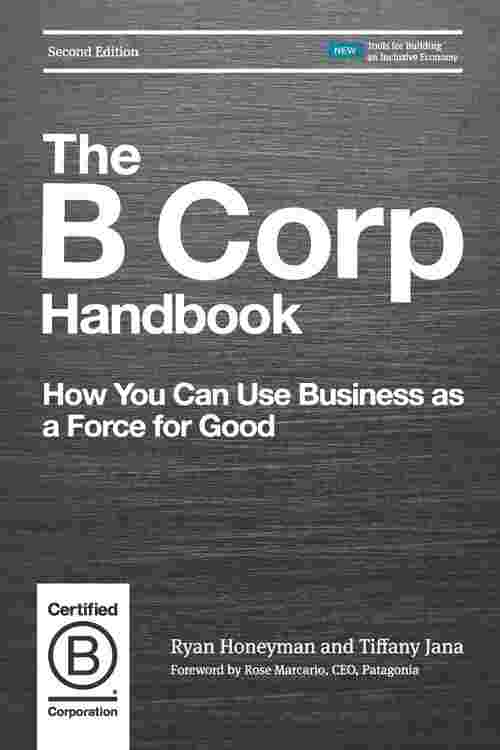 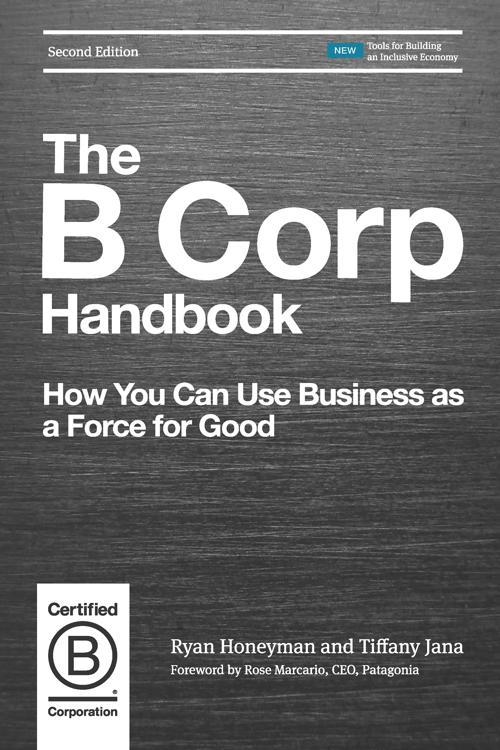 " This book shows how using business as a force for good, not just pursuing short-term profits, can be better for consumers, employees, local communities, the environment, and your company's long-term bottom line."
—Tony Hsieh, New York Times bestselling author of Delivering Happiness and CEO, Zappos.com, Inc. B Corps are a global movement of more than 2, 700 companies in 60 countries—like Patagonia, Ben & Jerry's, Kickstarter, Danone North America, and Eileen Fisher—that are using the power of business as a force for good. B Corps have been certified to have met rigorous standards of social and environmental performance, accountability, and transparency. This book is the authoritative guide to the what, why, and how of B Corp certification. Coauthors Ryan Honeyman and Dr. Tiffany Jana spoke with the leaders of over 200 B Corps from around the world to get their insights on becoming a Certified B Corp, improving their social and environmental performance, and building a more inclusive economy. The second edition has been completely revised and updated to include a much stronger focus on diversity, equity, and inclusion (DEI). These changes are important because DEI can no longer be a side conversation—it must be a core value for any company that aspires to make money and make a difference. While this book is framed around the B Corp movement, any company, regardless of size, industry, or location, can use the tools contained here to learn how to build a better business. As the authors vividly demonstrate, using business as a force for good can help you attract and retain the best talent, distinguish your company in a crowded market, and increase trust in your brand.

Ryan first discovered the AND 1 mixtapes in the late 1990s. The mixtapes were a series of basketball “streetballing” videos, created by the popular basketball shoe and apparel company AND 1, that featured lightning-quick ball handling, acrobatic slam dunks, and jaw-dropping displays of individual talent. Ryan was a huge fan of the AND 1 mixtapes because the players used flashy, show-off moves that were very different from the more traditional style of basketball played in college or the NBA at the time. Ryan was so fascinated with the mixtapes that he even integrated them into his lesson plans when he worked as an English teacher in Zhejiang Province, China.
Many years later, Ryan was quite surprised to find out that AND 1’s cofounders, Jay Coen Gilbert and Bart Houlahan, along with Andrew Kassoy, their longtime friend and former Wall Street private equity investor, were the people who created the Certified B Corporation. Ryan learned that Coen Gilbert’s and Houlahan’s experiences at AND 1, and Kassoy’s experience on Wall Street, were central to their decision to get together to start B Lab, the nonprofit behind the B Corp movement.
AND 1 was a socially responsible business before the concept was well known, although AND 1 would not have identified with the term back then. AND 1’s shoes weren’t organic, local, or made from recycled tires, but the company had a basketball court at the office, on-site yoga classes, great parental leave benefits, and widely shared ownership of the company. Each year it gave 5 percent of its profits to local charities promoting high-quality urban education and youth leadership development. AND 1 also worked with its overseas factories to implement a best-in-class supplier code of conduct to ensure worker health and safety, fair wages, and professional development.
That was quite progressive for a basketball shoe company, especially because its target consumer was teenage basketball players, not conscious consumers with a large amount of disposable income. AND 1 was a company where employees were proud to work.
AND 1 was also successful financially. From a bootstrapped start-up in 1993 to modest revenues of $4 million in 1995, the company grew to more than $250 million in U.S. revenues by 2001. This meant that AND 1—in less than ten years—had risen to become the number two basketball shoe brand in the United States (behind Nike). As with many endeavors, however, success brought its own set of challenges.
AND 1 had taken on external investors in 1999. At the same time, the retail footwear and clothing industry was consolidating, which put pressure on AND 1’s margins. To make matters worse, Nike decided to put AND 1 in its crosshairs at its annual global sales meeting. Not surprisingly, this combination of external forces and some internal miscues led to a dip in sales and AND 1’s first-ever round of employee layoffs. After painfully getting the business back on track and considering their various options, Coen Gilbert, Houlahan, and their partners decided to put the company up for sale in 2005.
The results of the sale were immediate and difficult for Coen Gilbert and Houlahan to watch. Although the partners went into the sale process with eyes wide open, it was still heartbreaking for them to see all of the company’s preexisting commitments to its employees, overseas workers, and local community stripped away within a few months of the sale.

The Search for “What’s Next?”

In their journey from basketball (and Wall Street) to B Corps, Coen Gilbert, Houlahan, and Kassoy had a general sense of what they wanted to do next: the most good for as many people as possible for as long as possible. How this would manifest, however, was not initially clear.
Kassoy was increasingly inspired by his work with social entrepreneurs as a board member of Echoing Green (a private equity firm focused on social change) and the Freelancers Insurance Company (a future Certified B Corporation). Houlahan became inspired to develop best practices to support values-driven businesses that were seeking to raise capital, grow, and hold on to their socially and environmentally responsible missions. And Coen Gilbert, though proud of AND 1’s culture and practices, wanted to go much further, inspired by the stories of iconic socially responsible brands such as Ben & Jerry’s, Newman’s Own, and Patagonia, whose organizing principle seemed to be how to use business for good.
The three men’s initial, instinctive answer to the “What’s next?” question was to create a new company. Although AND 1 had a lot to be proud of, they reasoned, the company hadn’t been started with a specific intention to benefit society. What if they started a company with that intention? After discussing different approaches, however, Coen Gilbert, Houlahan, and Kassoy decided that they would be lucky to create a business as good as those created by existing social entrepreneurs such as Ahmed and Reem Rahim from Numi Organic Tea and Mike Hannigan and Sean Marx from Give Something Back Office Supplies. And more importantly, they decided that even if they could create such a business, one more business, no matter how big and effective, wouldn’t make a dent in addressing the world’s most pressing challenges.
They then thought about creating a social investment fund. Why build one company, they reasoned, when you could help build a dozen? That idea was also short lived. The three decided that even if they could be as effective as existing social venture funds such as Renewal Funds, RSF Social Finance, or SJF Ventures, a dozen fast-growing, innovative companies was still not adequate to address society’s challenges on a large scale.
What Coen Gilbert, Houlahan, and Kassoy discovered, after speaking with hundreds of entrepreneurs, investors, and thought leaders, was the need for two new basic elements to accelerate the growth of—and amplify the voice of—the entire socially and environmentally responsible business sector. This existing community of leaders said they needed a legal framework to help them grow while maintaining their original mission and values, and credible standards to help them distinguish their businesses in a crowded marketplace, where so many seemed to be making claims about being a “good” company.
To that end, in 2006 Coen Gilbert, Houlahan, and Kassoy cofounded B Lab, a nonprofit organization that serves a global movement of people using business as a force for good. The B Lab team worked with many leading businesses, investors, and attorneys to create a comprehensive set of performance and legal requirements—and they started certifying the first B Corporations in 2007.
I often wonder to what extent business can help society in its goals to alleviate poverty, preserve ecosystems, and build strong communities and institutions. . . . B Lab has proven that there is a way.
Madeleine Albright, former U.S. Secretary of State

B Corps: A Quick Overview

Certified B Corporations are companies that have been certified by the nonprofit B Lab to have met rigorous standards of social and environmental performance, accountability, and transparency. B Corp certification is similar to Leadership in Energy and Environmental Design (LEED) certification for green buildings, Fairtrade certification for coffee, or USDA Organic certification for milk. A key difference, however, is that B Corp certification is of an entire company and its practices (such as worker engagement, community involvement, environmental footprint, governance structure, and customer relationships) rather than looking at just one aspect of a company (such as the building or a product). This big picture evaluation is important because it helps distinguish between good companies and just good marketing.
Today, there is a growing global community of thousands of Certified B Corporations across hundreds of industries working together toward one unifying goal: to redefine success in business so that one day all companies will compete not just to be the best in the world but also to be the best for the world.
When we first heard about the B Corp movement, we said, “That’s what we’ve been trying to say and do this whole time!” It just fit with our approach and philosophy completely.
Alex Houlston, Energy for the People—Australia
As a quick overview, companies that wish to become Certified B Corporations must meet three basic requirements: verified social and environmental performance, legal accountability, and public transparency. Each of these steps, briefly outlined here, will be covered in more detail later i...