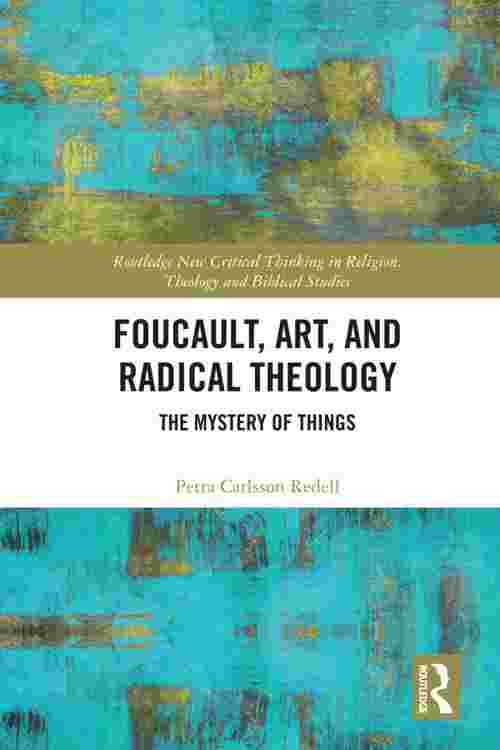 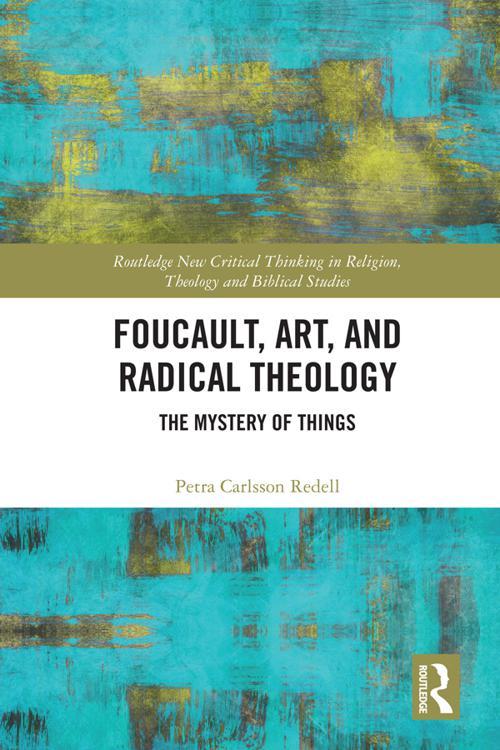 Michel Foucault wrote prolifically on many topics including, art, religion, and politics. He also eloquently articulated how power structures are formed and how they also might assist resistance and emancipation. This book uses the hermeneutical lens of Foucault's writings on art to examine the performative, material, and political aspects of contemporary theology.

The borderland between philosophy, theology, and art is explored through Foucault's analyses of artists such as Diego Velázquez, Édouard Manet, René Magritte, Paul Rebeyrolle, and Gerard Fromanger. Here special focus is placed on performativity and materiality—or what the book terms the mystery of things. At successive junctures, the book discovers a postrepresentational critique of transcendence; an enigmatic material sacramentality; playful theopolitical accounts of the transformative force of stupidity and nonsense; and political imagery in motion enabling theological interpretations of contemporary collectives such as Pussy Riot and the Sisters of Perpetual Indulgence. In conversation with contemporary thinkers including Catherine Keller, Louise-Marie Chauvet, John Caputo, Daniel Barber, Mark C. Taylor, Jeffrey W. Robbins, and Mattias Martinson, the book outlines this source of inspiration for contemporary radical theology.

This is a book with a fresh and original take on Foucault, art, and theology. As such, it will have great appeal to scholars and academics in theology, religion and the arts, the philosophy of religion, political philosophy, and aesthetics.

1 The surface of appearances

A mystery of things

There is a key figure of thought in Foucault that I find particularly thought-provoking in relation to theology. It is the Foucauldian discursive account of knowledge as a surface of appearances—what I denote in this book as a mystery of things. This challenges theology since it leaves no room for transcendence, yet it lets the world stand forth as a rather mysterious place, pointing toward the tangibility of this world without avoiding or diminishing the complexity of life or the enigmas of knowledge. Before entering into Foucault’s art analyses and their theological and political dimensions, there is need to outline this notion, which lies at the core of this study.
This chapter seeks to show, if only briefly, how Foucault’s notion of the world as an enigmatic, discursive surface grows out of his earlier account of language and how it comes to involve also notions of materiality that, paradoxically, remain open to material accounts of spirituality. This aspect of Foucault’s work is palpable in his writings on art for several reasons that are explored in the following chapters but also for one very simple reason: paintings are all about visible surfaces. Not long before Foucault wrote his essay on Fromanger, he was asked about his relationship to painting. “What I like in painting is precisely that one is really obliged to look. And that is my repose. It is one of the few things I write about with pleasure and without fighting against anything at all.”1
It is the obligation to look that is Foucault’s repose in relation to art. Naturally, this could mean a number of things. The reason for him feeling at ease when writing about art could simply be the liberating experience of visiting an academic arena that is not one’s own. In line with Foucault’s philosophical endeavor, however, it could also be linked to painting being all about appearances, all about the visible, and thus already about an experience of the surface. The obligation to pay close attention simply to what appears could legitimize a surface approach to analysis; hence, his discursive perspective would require no methodological struggle or legitimization. For a philosopher who explores the world as appearance, the obligation only to look could well be experienced as a repose.
Foucault never developed an extensive book-length account of painting, but at the end of The Archaeology of Knowledge he sketched ideas for future archeological projects, one of those being an archeological analysis of painting. There he writes that painting in such an analysis would not be understood as a language, that is, as a means to describe and explain the world or the artist’s intentions; it would not be seen as materialized ideas. Nor, however, would painting in such an analysis be regarded as a pure and independent expression in itself, a pure visibility that cannot be interpreted or that is unrelated to the discourse of which it is a part. In other words, in an imaginary Foucauldian analysis, painting would be seen neither as “words” to translate nor as “things” to classify; it would be neither pure ideas nor pure materiality but both and neither because painting, Foucault writes, is a “discursive practice that is embodied in techniques and effects.”2
The techniques, practices, and gestures of the painters do themselves embody discursive knowledge, as do the color, space, distance, light, and proportions on the canvas, Foucault argues (AK 193/253). The things and movements themselves embody knowledge in a way that cannot be fully translated or nailed down by other forms of expression. But before we delve deeper into the superficiality of the canvas, let us see how this approach to painting relates to the emergence of the notion of discourse in Foucault’s earlier writings.

The surface and the death of man

When P. Caruso asked Foucault in an interview in 1967 about his “spiritual masters,” Foucault answered that for a long time, there was an unresolved conflict in him. There was a tension between “a passion for Bataille and Blanchot,” on one hand, and an interest in what Foucault describes as “certain positive studies, like those of Dumézil and Lévi-Strauss,” on the other hand.7 The structural ethnography of George Dumézil and Claude Levi-Strauss stood against the avant-garde writing of Bataille and Blanchot.8 Foucault goes on to note that the common denominator between these areas of interest was the “religious question” and that they both led him to “the theme of the disappearance of the subject” (W 98/614). That is to say, the writers and the ethnographic scholars were united in their critique of transcendence and, hence, their critique of the subject. Foucault found a way to combine the two.
The initial conflict eventually turned into a methodological and philosophical approach guided by these disparate interests. The dissolution of the subject in Blanchot’s notion of a language of the outside (to which we shall return), and Bataille’s transgressive eroticism similarly questioning the subject, were brought together with the structural and functional analyses of Dumézil and Lévi-Strauss. The result, as described by Foucault in the interview, “simplifying things a bit,” was a rigorous discourse on structure that led to a negative discourse on the subject. It was a discursive analysis of knowledge instigating a notion of knowledge no longer dependent on the subject but instead, “in short,” Foucault says, “a discourse similar to Bataille’s and Blanchot’s” (W 98/614). Earlier in the interview, Foucault had already indicated the way in which the death of the subject in Blanchot and Bataille is supported by his structurally inspired approach. His own studies have suggested, he says, that knowledge can in fact be described without reference to the subject. The cogito is not inevitable for analysis of knowledge:
It is surely significant that I have been able to describe structures of knowledge as a whole without ever referring to the cogito, even though people were for several centuries convinced of the impossibility of analyzing knowledge without starting from the cogito.
(W 95/610)
The connection between the dissolution of the subject in Blanchot and Bataille and the structuralism in Lévi-Strauss and Dumézil suggests an approach to the study of knowledge in which the depth of the cogito is replaced by the surface of knowledge.
The approach is put to work and made concrete in The Order of Things, published a year before Caruso’s interview.9 The book famously depicts how the journey of the human sciences is a journey that begins with God and ends with the disappearance of the subject. Until the end of the sixteenth century, words and their meanings belonged to God, Foucault argues, while in modern thought they belong to man. The notion of God controlling the words, possessing the knowledge of their meanings (hidden to man), was replaced by man, the knowing subject, who in modernity was seen to hide the meanings of words from himself, in accordance with psychoanalytic thought. Just as divine knowledge was partly hidden from man in premodern thought, so was human knowledge in the twentieth century. Accordingly, Foucault suggests that the role of the priest guiding man in his search for knowledge about God is replaced by the therapist guiding man in his search for the hidden truth about himself.
In order for this substitution of man for God to be possible, however, there had to be a change in the account of language. There had to be an alteration in the way language was understood to relate to the world of things and experiences. Words and things had to be separated from their initial mystical bond of divine and transcendent meaning and then reconnected in the subject through an immanent account of meaning, that is, in a logic of signification. And such changes at the very foundation of language continue. The story does not end with modern thinking substituting God for man. Foucault argues that a next step, a step beyond the subject, is expressed, for instance, in modern literature by writers, like Stéphane Mallarmé, who manage to free language from any point of view and thus from the transcendental subject.10 Still, as suggested in the interview, Foucault’s investigation itself could equally well serve to exemplify the move beyond the subject. The plain fact that Foucault’s story of the history of Western science can be told indicates that neither God nor man is required for knowledge. Foucault’s study itself shows not only that representation has changed from being guided by the divine to being led by, and finally reach beyond, the human but also that knowledge can be described without final reference to neither of the two. Just as the space for man as the center of knowledge appeared during a certain historical time, it is likely that other spaces will open beyond the humanistic paradigm (and that the subject will reappear in different forms, as in Foucault’s la...