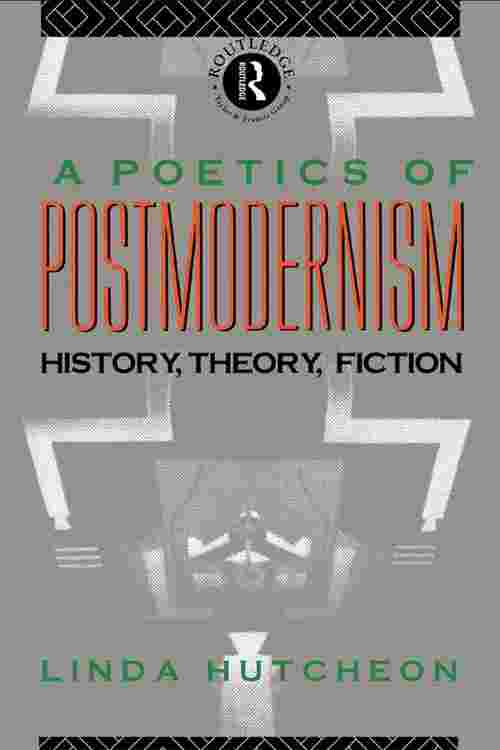 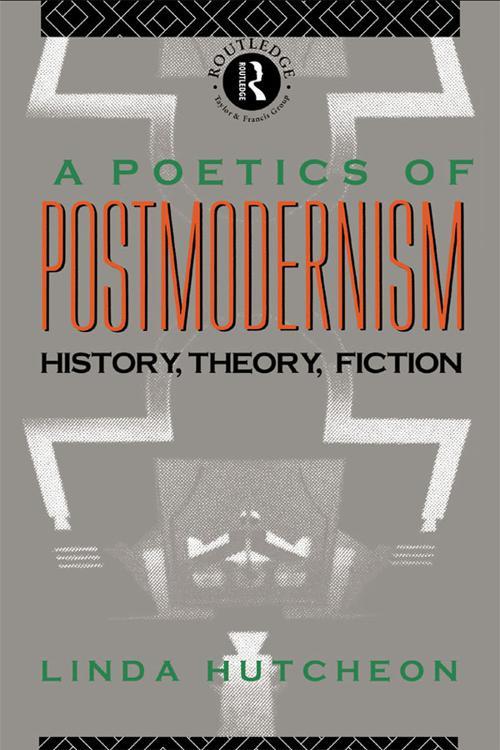 First published in 1988. Routledge is an imprint of Taylor & Francis, an informa company.

1: THEORIZING THE POSTMODERN: TOWARD A POETICS

What is the postmodern scene? Baudrillard’s excremental culture? Or a final homecoming to a technoscape where a “body without organs” (Artaud), a “negative space” (Rosalind Krauss), a “pure implosion” (Lyotard), a “looking away” (Barthes) or an “aleatory mechanism” (Serres) is now first nature and thus the terrain of a new political refusal? Arthur Kroker and David Cook
What precisely, though, is being challenged by postmodernism? First of all, institutions have come under scrutiny: from the media to the university, from museums to theaters. Much postmodern dance, for instance, contests theatrical space by moving out into the street. Sometimes it is overtly measured by the clock, thereby foregrounding the unspoken conventions of theatrical time (see Pops 1984, 59). Make-believe or illusionist conventions of art are often bared in order to challenge the institutions in which they find a home—and a meaning. Similarly Michael Asher sandblasted a wall of the Toselli Gallery in Milan in 1973 to reveal the plaster beneath. This was his “work of art,” one that collapsed together the “work” and the gallery so as to reveal at once their collusion and the strong but usually unacknowledged power of the gallery’s invisibility as a dominant (and dominating) cultural institution (see Kibbins 1983).
The important contemporary debate about the margins and the boundaries of social and artistic conventions (see Culler 1983, 1984) is also the result of a typically postmodern transgressing of previously accepted limits: those of particular arts, of genres, of art itself. Rauschenberg’s narrative (or discursive) work, Rebus, or Cy Twombly’s series on Spenserian texts, or Shosaku Arakawa’s poster-like pages of The Mechanism of Meaning are indicative of the fruitful straddling of the borderline between the literary and visual arts. As early as 1969, Theodore Ziolkowski had noted that the
new arts are so closely related that we cannot hide complacently behind the arbitrary walls of self-contained disciplines: poetics inevitably gives way to general aesthetics, considerations of the novel move easily to the film, while the new poetry often has more in common with contemporary music and art than with the poetry of the past.
(1969, 113)
The years since have only verified and intensified this perception. The borders between literary genres have become fluid: who can tell anymore what the limits are between the novel and the short story collection (Alice Munro’s Lives of Girls and Women), the novel and the long poem (Michael Ondaatje’s Coming Through Slaughter), the novel and autobiography (Maxine Hong Kingston’s China Men), the novel and history (Salman Rushdie’s Shame), the novel and biography (John Banville’s Kepler)? But, in any of these examples, the conventions of the two genres are played off against each other; there is no simple, unproblematic merging.
In Carlos Fuentes’s The Death of Artemio Cruz, the title already points to the ironic inversion of biographical conventions: it is the death, not the life, that will be the focus. The subsequent narrative complications of three voices (first-, second-, and third-person) and three tenses (present, future, past) disseminate but also reassert (in a typically postmodernist way) the enunciative situation or discursive context of the work (see Chapter 5). The traditional verifying third-person past tense voice of history and realism is both installed and undercut by the others. In other works, like Italian writer Giorgio Manganelli’s Amore, the genres of theoretical treatise, literary dialogue, and novel are played off against one another (see Lucente 1986, 317). Eco’s The Name of the Rose contains at least three major registers of discourse: the literary-historical, the theological-philosophical, and the popular-cultural (de Lauretis 1985, 16), thereby paralleling Eco’s own three areas of critical activity.
The most radical boundaries crossed, however, have been those between fiction and non-fiction and—by extension—between art and life. In the March 1986 issue of Esquire magazine, Jerzy Kosinski published a piece in the “Documentary” section called “Death in Cannes,” a narrative of the last days and subsequent death of French biologist, Jacques Monod. Typically postmodern, the text refuses the omniscience and omnipresence of the third person and engages instead in a dialogue between a narrative voice (which both is and is not Kosinski’s) and a projected reader. Its viewpoint is avowedly limited, provisional, person...