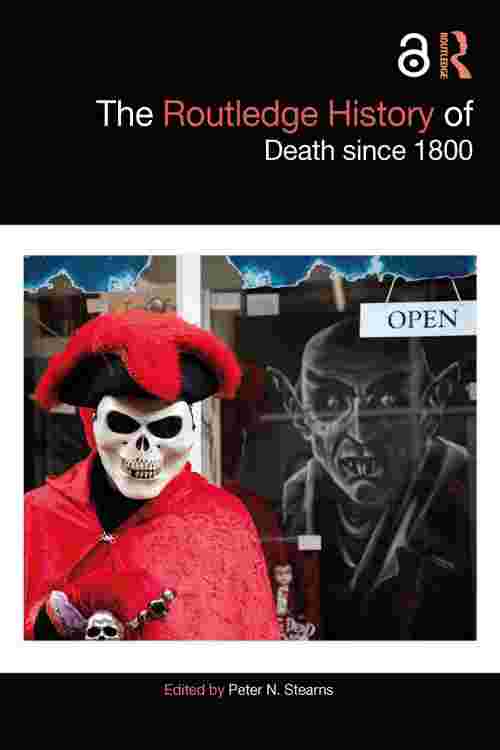 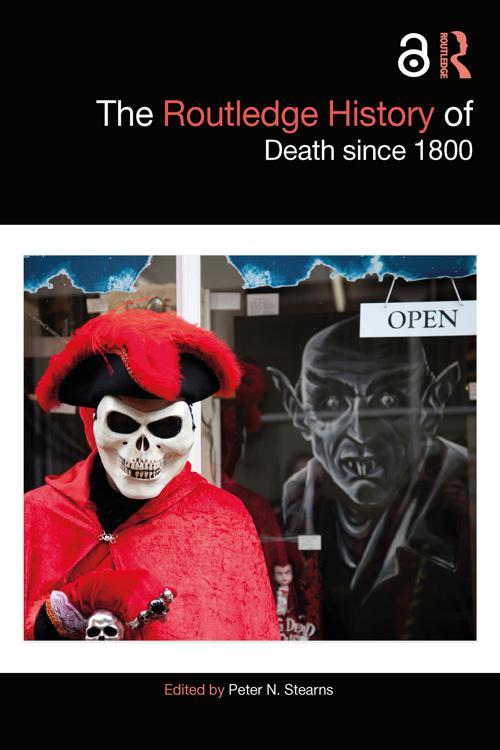 The Routledge History of Death Since 1800 looks at how death has been treated and dealt with in modern history – the history of the past 250 years – in a global context, through a mix of definite, often quantifiable changes and a complex, qualitative assessment of the subject.

The book is divided into three parts, with the first considering major trends in death history and identifying widespread patterns of change and continuity in the material and cultural features of death since 1800. The secondpart turns to specifically regional experiences, and the third offers more specialized chapters on key topics in the modern history of death. Historical findings and debates feed directly into a current and prospective assessment of death, as many societies transition into patterns of ageing that will further alter the death experience and challenge modern reactions. Thus, a final chapter probes this topic, by way of introducing the links between historical experience and current trajectories, ensuring that the book gives the reader a framework for assessing the ongoing process, as well as an understanding of the past.

Global in focus and linking death to a variety of major developments in modern global history, the volume is ideal for all those interested in the multifaceted history of how death is dealt with in different societies over time and who want access to the rich and growing historiography on the subject.

Chapter1 of this book is freely available as a downloadable Open Access PDF under a Creative Commons Attribution-Non Commercial-No Derivatives 4.0 license at https://tandfbis.s3-us-west-2.amazonaws.com/rt-files/docs/Open+Access+Chapters/9780429028274_oachapter1.pdf.

Publisher
Routledge
Year
2020
ISBN
9780429639845
Topic
History
Subtopic
Social History
Edition
1
The chapters in this part deal with major patterns of death in modern world history that cut across geographic regions, addressing death as a physical and a cultural phenomenon alike. Topics range from basic material trends – shifts in death rates and causes and the modern evolution of epidemics – to connections with death in domains such as capital punishment or trends in murder and suicide, exploring the complex patterns of violence in the modern history of death, to key cultural and ritual features, such as the design of cemeteries or the impact of major war on commemoration. Several modern settings have generated distinctive attitudes toward death – of others and often of self – on the part of terrorists. A final chapter, focused on debates over death as a modern taboo, touches on fundamental cultural and emotional issues, inviting juxtaposition with the analyses of changes in the physical nature of death and aspects of modern death policies.
While global in implication, the chapters vary in their actual geographical coverage, reflecting different stages of research on the subject and in some cases, demonstrable regional variants – such as the unusual conditions that generate the terrorist approach to death.
Collectively the chapters also raise issues about connections. The initial essay on basic trends on mortality rates and causes centers on the huge physical changes in the nature of death over the past 250 years, but the patterns also reflect prior shifts and expectations and policies concerning death and its prevention, ultimately on a global basis. Cultural issues and outcomes, in other words, surround the modern demographic structures.
Other connections invite attention. Do change and variations in murder rates, for example, have much to do with other facets of death in the modern world, or are they mainly linked to factors such as judicial policy or cultures of honor? How do the marked shifts in the incidence of death penalties (and the ways such penalties are administered) relate to broader trends in attitudes toward death? Interpretations of suicide have obviously changed greatly since the eighteenth century; is this an isolated development or does it express other recalibrations in thinking about death and preventions of death? New commemorations of war reflect modern types of casualties but also wider cultural shifts toward the death of individuals. The subject of death in war deserves attention not only in its own right but for its implications for other aspects of the modern death experience (a theme picked up in several later chapters as well). How have changes in cemetery design reflected – or anticipated – shifts in the material realities of death?
Overall, the essays in this part particularly invite attention to the close and mutual links between changes in the physical features of death and the cultural and even emotional impacts of death as part of the modern condition.
This chapter provides a brief introduction to mortality patterns over the last two centuries from a global perspective. The period witnessed enormous and ubiquitous rises in life expectancy at birth, from a global average of perhaps 30 years in 1800 to an estimated average of 72.6 years in 2019.2 Remarkably, these changes took place despite a perhaps seven- to eight-fold increase of the world’s population, from around 1 billion in 1800 to 7.7 billion in 2020,3 and in the context of unprecedented increases in the speed and frequency of transmission of infectious diseases as a consequence of urbanization, colonization, technological change, and the globalization of trade. This chapter will outline the broad geography and chronology of changes in patterns of mortality and will introduce debates regarding the role of economic growth and those of medicine and states. It concludes with a discussion of recent and future trends.
The wide chronological and geographical reach of the chapter necessitates an immediate caveat. For much of the world, we know very little about mortality rates or levels for national populations before the mid-twentieth century at the very earliest. The United Nations began to publish estimates of mortality rates and data on causes of death for member states in 1950; however, these series are very incomplete and in many cases rely on estimates from rather fragmentary data, even now. For most of sub-Saharan Africa, scholars and public health systems remain reliant on epidemiological surveillance centers and international survey data, and even the largest states, India and China, still use sample registration and surveillance systems in lieu of complete registration of all deaths by age and cause.4 Given these limitations regarding national patterns and trends, we naturally know even less about health and mortality amongst subgroups within national populations, and about the heterogeneity of experiences in historical societies. This chapter therefore offers a rather impressionistic and selective view of the profound changes in mortality patterns that have occurred in the last two hundred years.

In the broadest terms, what the economist and demographer Richard Easterlin dubbed the ‘Mortality Revolution’ was predominantly a function of enormous reductions in infectious disease mortality.5 These diseases had their greatest impacts on young children and young adults, and therefore mortality improved first and fastest in these age groups. Since 1800 death has been ever-increasingly confined to the extremes of life, in early infancy and old age, and infectious diseases have given way to non-communicable diseases, especially cancers, strokes and cardiovascular diseases, and, increasingly, dementia, as more and more people live to the ages where these diseases predominate. Latterly, improvements in the prevention and treatment of non-communicable diseases have improved survival even at the oldest ages, further extending life expectancy. These patterns have, however, unfolded with very different chronologies in different parts of the world, and with some notable reversals.
Figure 1.1 presents this mortality transition in stylized form for the population of England and Wales. Panels a and b represent the situation in 1841. By 1841, as discussed below, the English population was already free of famine, and major mortality crises were extremely rare. Nonetheless, life expectancy at birth was only 42 years, and infectious diseases accounted for nearly half of all deaths. Panel a illustrates the chance of survival to each age, using a hypothetical population of 1,000 people. We have to imagine that these people were all born at the same time and lived their lives with the mortality rates of the English and Welsh population in 1841 (this is not what actually happened to those born in 1841, most of whom were subject to substantial improvements in prevailing mortality rates during their lives). This type of plot is termed a ‘survivorship curve’, and shows the survivors of our hypothetical population, or cohort, at each age. Of the 1,000 babies born in 1841, 138 would have been dead before their first birthday. For those who survived infancy, the risk lessened; however, a quarter of all those born would not survive to age 5. By age 47, half would be dead.
Panel b shows the distribution of these deaths by age, in 1841. Deaths were heavily concentrated in infancy (the first year of life) and early childhood. However, deaths in adulthood were also relatively high at all adult ages. This contrasts markedly with the situation a century later. By 1950 almost everyone born into our hypothetical cohort could expect to live to adulthood, and half would survive to 74. Deaths had become concentrated overwhelmingly in late adulthood. The absolute numbers of deaths were higher in late adulthood than in 1841, not because death rates were higher at these ages in 1950, but because a far higher proportion of the cohort now survived to these ages.
Comparison of panels a and c illustrates what has been termed the ‘rectangularization of mortality’. This is the shift in the pattern of survival from a fairly constant downward curve by age, as in panel a, to a more rectangular form, where most people survive until late age, into their 70s or 80s, and there is a compression or a concentration of mortality into these age groups. Panels e and f illustrate subsequent changes in the mortality patterns of affluent populations since the mid-twentieth century. Broadly, there has been a further ‘rectangularization’, and deaths are even more concentrated at the oldest ages. However there has also been a shift of the whole survival curve to older ages. That is, not only do most people survive to later ages (over half of our hypothetical cohort would live to 85, under the mortality rates of 2016), but the age at which most of the population has died has shifted to older ages.
Figure 1.1 also shows life expectancy measures for the population of England and Wales in 1841, 1950, and 2016. Critically, life expectancy at birth is not the age by which most of the population would be dead, as is sometimes assumed. Rather, it is the average age at death. This means that even in populations with relatively low life expectancies, a substantial proportion of adults lived into their sixties and seventies. Indeed, as can be seen in Figure 1.1, the average age at death is usually lower than the age to which half the population could expect to survive, because the former figure takes into account how many years people lived. High death rates in childhood lower the average age at death because they contribute only very small values to the sum of ages at death. Life expectancy is calculated using hypothetical populations, as in our example, instead of actual populations because the average age at death in real populations is affected by the age structure of the population. The age structures of populations, and therefore the average age of death, can vary very considerably over time and between populations for reasons other than prevailing mortality rates, including historical changes in fertility, mortality, and age-specific migration rates.
Figure 1.1 depicts the very profound changes in mortality patterns that occurred in the population of England and Wales over the last 170 years. The rest of the chapter considers the processes underlying these trends, and how widespread and uniform these processes were globally.

How ubiquitous has this ‘mortality revolution’ been? Figure 1.2a shows estimates of global average l...