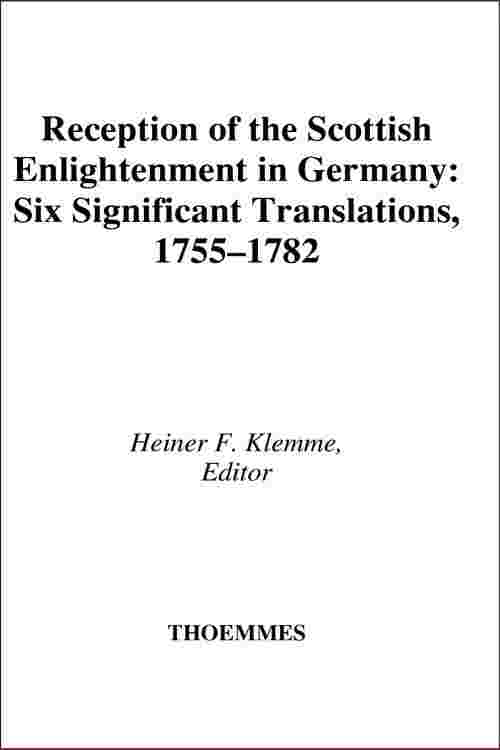 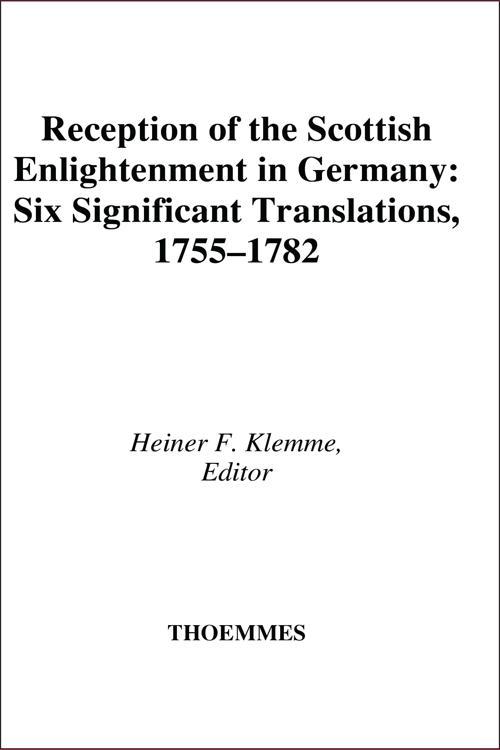 'Heiner Klemme has put together an important collection. It will be useful to historians of eighteenth-century philosophy and scholars of the German, Scottish and European Enlightenment, as well as to anyone interested in the way that ideas are transmitted, and often altered, though the process of translation.'
-- Richard B. Sher, 18th-Century Scottish Studies Society 'Heiner Klemme is one of the few German experts on the Scottish Enlightenment and its influence on the formation of the German Enlightenment. Since it is impossible to understand the philosophical discussion in eighteenth-century Germany after the death of Christian Wolff unless we take into account the impact of the writings of Hutcheson, Hume, Ferguson, Smith, Reid, Beattie, and others, these editions will be indispensable. Dr. Klemme's introductions will be most helpful for putting these writings into their proper historical context. Reception of the Scottish Enlightenment in Germany will certainly engender further research on this topic.'
--Reinhard Brandt, Philipps-Universität Marburg Scottish philosophy had a decisive impact in the eighteenth century, not only on the English-speaking world but also on the Enlightenment in central Europe. That impact was perhaps most greatly felt in Germany, where the advancement of Scottish moral sense philosophy, Hume's Scepticism and Common Sense philosophy was marked by a series of important translations. Six of the most significant texts, most of them very rare today, are reprinted here. Although some of the works by Scottish philosophers were known and discussed before the death of Christian Wolff, their importance increased considerably after the decline of German school metaphysics around the middle of the century. English at that time was less widely known, so the German editions became highly influential. The translations were often by important German Enlightenment thinkers and philosophers such as Lessing and Christian Garve, and several were provided with interesting introductions and commentaries by their translators and editors. In the case of Hume's first Enquiry, the editor Johann Georg Sulzer, an adherent of Wolffian metaphysics, commented extensively on Hume's philosophy. It was this translation that famously woke Kant from his 'dogmatic slumber'. The definitive source material collected in this set, along with the extensive new editorial material, makes it possible for the first time to fully assess the significance of this important period. --collects some of the most important translations of great Scottish Enlightenment works into German
--definitive source material for the German Enlightenment in general and particularly for Kant studies
--includes very scarce translations by major figures of the German Enlightenment
--each volume has a new introduction by Heiner F. Klemme, co-editor of David Hume in Deutschland