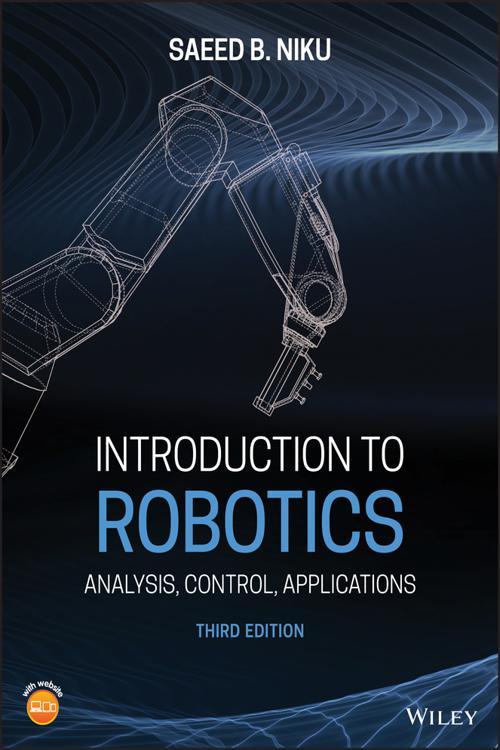 The revised text to the analysis, control, and applications of robotics

The revised and updated third edition of Introduction to Robotics: Analysis, Control, Applications, offers a guide to the fundamentals of robotics, robot components and subsystems and applications. The author - a noted expert on the topic - covers the mechanics and kinematics of serial and parallel robots, both with the Denavit-Hartenberg approach as well as screw-based mechanics. In addition, the text contains information on microprocessor applications, control systems, vision systems, sensors, and actuators.

Introduction to Robotics gives engineering students and practicing engineers the information needed to design a robot, to integrate a robot in appropriate applications, or to analyze a robot. The updated third edition contains many new subjects and the content has been streamlined throughout the text. The new edition includes two completely new chapters on screw-based mechanics and parallel robots. The book is filled with many new illustrative examples and includes homework problems designed to enhance learning.

Written for students of engineering as well as practicing engineers, Introduction to Robotics, Third Edition reviews the basics of robotics, robot components and subsystems, applications, and has been revised to include the most recent developments in the field.

Robotics, the fascinating world of creating devices that mimic living creatures and are capable of performing tasks and behaving as if they are almost alive and able to understand the world around them, has been on humans' minds since the time we could build things. You may have seen machines made by artisans, which try to mimic humans' motions and behavior. Examples include the statues in Venice's San Marcos clock tower that hit the clock on the hour, figurines that tell a story in the fifteenth century astronomical clock on the side of the Old Town Hall tower in Prague, and the systems that Leonardo da Vinci sketched in his notebooks. Toys, from very simple types to very sophisticated machines with repeating movements, are other examples. In Hollywood, movies have even portrayed robots and humanoids as superior to humans.
Although humanoids, autonomous cars, and mobile robots are fundamentally robots and are designed and governed by the same basics, in this book we primarily study industrial manipulator‐type robots. This book covers some basic introductory material that familiarizes you with the subject; presents an analysis of the mechanics of robots including kinematics, dynamics, and trajectory planning; and discusses the elements that are used in robots and in robotics, such as actuators, sensors, vision systems, and so on. Robot rovers are no different, although they usually have fewer degrees of freedom (DOF) and generally move in a plane. Exoskeletal and humanoid robots, walking machines, and robots that mimic animals and insects have many DOF and may possess unique capabilities. However, the same principles we learn about manipulators apply to robot rovers too, whether kinematics, differential motions, dynamics, or control.
Robots are very powerful elements of today's industry. They are capable of performing many different tasks and operations, are accurate, and do not require common safety and comfort elements humans need, including in hazardous environments such as underwater, disaster areas, and space. However, it takes much effort and many resources to make a robot function properly. Most of the hundreds of companies that made robots in the mid‐1980s are gone; and, with few exceptions, only companies that make real industrial robots have remained in the market (such as OMRON Adept, Stäubli, ABB, FANUC, KUKA, Epson, Motoman, DENSO, Fuji, Yaskawa, Kawasaki, and Universal Robots, as well as specialty robotic companies such as MAKO Surgical Corp., and Intuitive). Although there are several million robots working in factories, and the numbers are growing, early industrialists' predictions about the possible number of robots in industry never materialized because high expectations could not be met with the present robots. Innovations such as artificial intelligence embedded in robots, and new types of robots (such as parallel robots), have improved the situation and will continue to do so. However, robots are used where they are useful. Like humans, robots can do certain things but not others. As long as they are designed properly for the intended purposes, they are very useful and continue to be used. Current predictions indicate sustained growth in the number of robots used in industry in many different forms, from manufacturing and assembly to self‐driving delivery robots, and from autonomous vehicles to domestic workers [1–4].
The subject of robotics covers many different areas. Robots alone are hardly ever useful: they are used together with peripheral devices and other manufacturing machines. They are generally integrated into a system, which as a whole is designed to perform a task or do an operation. In this book, we will refer to some of these other devices and systems that are used with robots.

If you compare a conventional robot manipulator with a crane attached to, let's say, a utility or towing vehicle, you will notice that the robot manipulator is very similar to the crane. Both possess a number of links attached serially to each other with joints, where each joint can be moved by some type of actuator. In both systems, the “hand” of the manipulator can be moved in space and placed in any desired location within the workspace of the system. Each one can carry a certain load, and in each, a central controller controls the actuators. However, one is called a robot, and the other is called a manipulator (or, in this case, a crane). Similarly, material‐handling manipulators that move heavy objects in manufacturing plants look just like robots, but they are not robots. The fundamental difference between the two is that the crane and the manipulator are controlled by a human who operates and controls the actuators, whereas the robot manipulator is controlled by a computer or microprocessor that runs a program (Figure 1.1). This difference determines whether a device is a simple manipulator or a robot. In general, robots are designed and meant to be controlled by a computer or similar device. The motions of the robot are controlled through a controller under the supervision of the computer, which is running some type of program. Therefore, if the program is changed, the actions of the robot will change accordingly. The intention is to have a de...