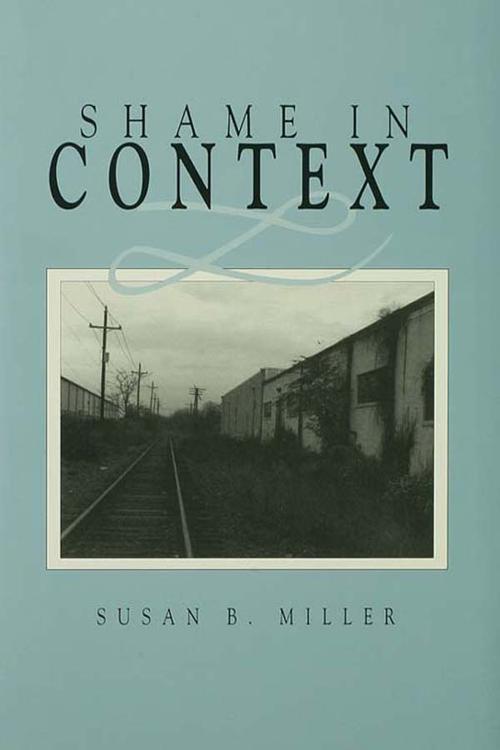 In this enlightening and gracefully written study, Susan Miller examines shame in a variety of clinical contexts en route to a richer understanding of shame dynamics. Miller attends especially to the role of shame in creating and maintaining character pathology and devotes separate sections of the book to shame in the context of obsessive-compulsive, narcissistic, and masochistic personality organizations. Within each of these clinical contexts, a chapter of theoretical discussion is followed by a chapter of engaging case examples.

Integral to Shame in Context is Miller's informed and thoughtful critique of current theories about shame, including those of Broucek, Morrison, Schore, Wurmser, Nathanson, and Kinston. In reviewing the contributions of these and other writers, she is most concerned with achieving a balanced comprehension of shame that incorporates the insights of different theoretical perspectives without embracing the selective emphases of any one investigator or school of thought. Like Freud, she appreciates the defensive utility of shame, but she attends equally to the painful and at times pathogenic acpects of shame experiences. In line with more recent shame literature, she emphasizes the pathogenicity of early shaming, but she is equally sensitive to the role of shame in sustaining character defenses. And she goes beyond the purview of other shame researchers in examining the ways in which individuals unconsciously seek to maintain shame experiences when these experiences sustain their personality organizations.

Offering a critical evaluation and synthesis of contemporary shame theories, and culminating in a balanced clinical understanding of shame in its various contexts, Shame in Context takes its place as, in the words of Frances Broucek, "the most sophisticated and definitive clinical study of shame to date."