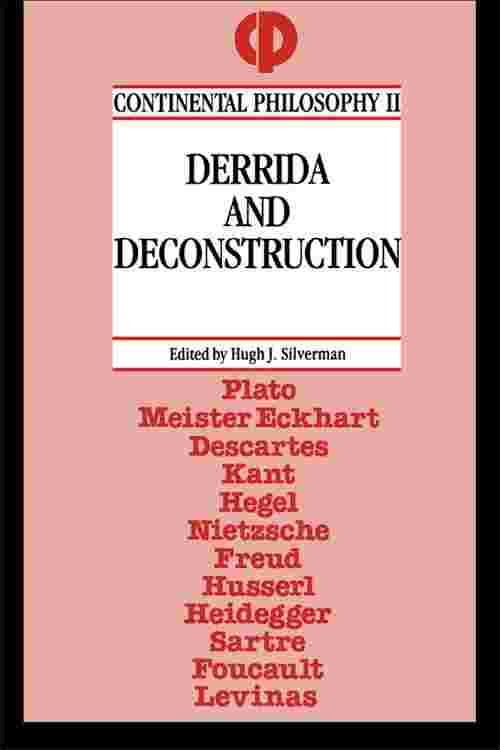 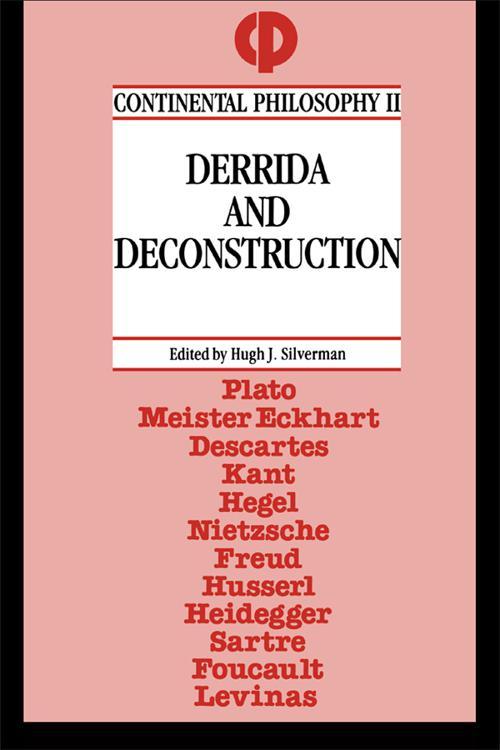 The effects of Derrida's writings have been widespread in literary circles, where they have transformed current work in literary theory. By contrast Derrida's philosophical writings--which deal with the whole range of western thought from Plato to Foucault--have not received adequate attention by philosophers. Organized around Derrida's readings of major figures in the history of philosophy, Derrida and Deconstruction focuses on and assesses his specifically philosophical contribution. Contemporary continental philosophers assess Derrida's account of philosophical tradition, with each contributor providing a critical study of Derrida's position on a philosopher she or he has already studied in depth These figures include Plato, Meister Eckhart, Descartes, Kant, Hegel, Nietzsche, Freud, Husserl, Heidegger, Sartre, and Foucault.

Yes, there is much of the ancients in what I have said. Everything perhaps.1
In the first part of Dissemination, Derrida offers a deconstructive reading of Plato. His discussion reveals a complex network of significations associated with the word pharmakon in and surrounding Plato’s texts. The unraveling of this hardly noticed and variously translated word, which does service for Plato in some of his most striking passages, reveals it to have an operational force that both sustains Plato’s discourse within the closure of metaphysical oppositions and hierarchical valuations and, in instituting these dichotomies, differs from the systematic structures that it produces. The word pharmakon has for Plato, as ‘supplement,’ ‘hama,’ ‘hymen,’ and other such ‘words’ have for other writers, a supplementary power and indecidable meaning that disrupts, in an ‘originary’ manner, the pristine purity and unadulterated presence that Plato ostensibly aspires to as the aim and final guarantee of philosophical discourse.
In this paper I follow three strands of Derrida’s intricate and often oscillating investigation of Plato’s texts: (1) One reading of Plato that Derrida gives follows Plato’s suppression of writing and traces the effects of this decision which produces the Platonic system of metaphysical oppositions and the effacement of an ‘originary’ or arche-writing in Plato’s texts. (2) In another reading, Derrida strategically pursues the various meanings of the Greek word pharmakon in and surrounding Plato’s texts. Here some of the facets of Derrida’s deconstructive reading of Plato are exposed. This reading discovers another text in Plato,one that has been read out to some extent in the history of Platonic interpretations, in part because of a proliferation of translations of the term pharmakon that cover over the contradictory force of this term in Plato and in part due to a certain necessity rooted in the metaphysical assumptions about language with which philosophy has operated. (3) But Derrida also recognizes within Plato’s own writings deconstructive strategies that themselves demand a ‘double reading’ and disrupt the univocity of Platonism. I follow Derrida in allowing these three strands to play on each other and do not attempt to deal with each of them in isolation.

I Writing on Derrida

II The derivative status of writing

The dialogue that thematizes Plato’s ambivalent relationship to the written word is of course the Phaedrus. In the Phaedrus, Socrates makes the point that the written speech of Lysias, like the epitaph on the tomb of Midas, has interchangeable parts that have no organizational or compositional integrity. The speech seemed to Socrates to say ‘the same thing several times over.’5 Like the epitaph, it is infinitely repeatable. It has no beginning or end, is not organized like a living being with head and tail. It is a dead discourse—mere repetition. Phaedrus, in contrast, considers the speech to have ‘not overlooked any important aspect of the subject’ (Phaedrus, 235b). Having a complete grasp of the subject, nothing more can be added to it. Thus the only task that remains is to memorize it so that one will always have it available to repeat randomly and at will. The two positions with regard to Lysias’s speech are ironically not far apart.6
What Socrates does in his first speech, his repetition of Lysias’s position, is to control the speech, arrange it on the basis of definition, subject it to the laws of dialectic. This decision about the style of writing that befits philosophical discourse sets the stage for the confrontation between sophistry and philosophy. The philosopher places his discourse at the service of a definition of the matter to be investigated.His discourse manifests the truth that this definition reveals and unfolds this truth in distinction from its opposite. In contrast, the sophists’ speech is capricious and without foundation. It does not hold itself responsible to the truth: ‘There is, they maintain, absolutely no need for the budding orator to concern himself with the truth’ (Phaedrus, 272d). Philosophical writing has something beyond itself to report. It can only repeat this message which has been inscribed elsewhere. Thus Derrida concludes: ‘The philosophical text, although it is in fact alwa...