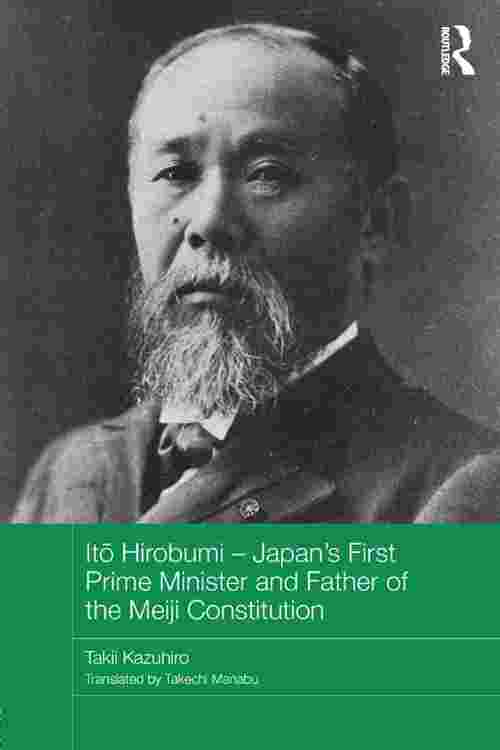 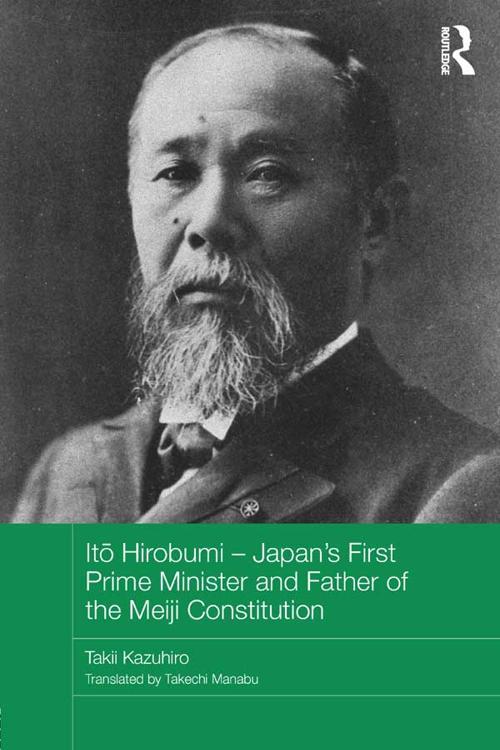 The brilliant and influential statesman, It? Hirobumi (1841-1909), and the first prime minister of Japan's modern state, has been poorly understood. This biography attempts to set the record straight about It?'s thought and vision for Japan's modernisation based on research in primary sources. It outlines It?'s life: the son of a poor farmer, he showed exceptional talent as a boy and was sent to study in Europe and the United States. He returned home convinced that Western civilisation was the only viable path for Japan. Following the Meiji Restoration of 1868, It? became a powerful intellectual and political force behind reforms of Japanese laws and institutions aimed to shape a modern government based on informed leadership and a knowledeable populace. Among his many achievements were the establishment of Japan's first constitution—the Meiji Constitution of 1889, and the founding in 1900 of a new type of constitutional party, the Rikken Seiyukai (Friends of Constitutional Government), which, reformulated after 1945, became the Liberal Democratic Party that has dominated Japanese politics in the postwar period. Concerning It?'s role as Japanese Resident-General in Korea from 1905, the author argues that It?'s aim, not understood by either the Japanese home government or Koreans themselves, was not to colonize Korea. He was determined to modernise Korea and consolidate further constitutional reforms in Japan. This aim was not shared by others, and It? resigned in 1909. He was assassinated the same year in Manchuria by a Korean nationalist. The Japanese language edition of this book is a bestseller in Japan, and it received the Suntory Prize for Social Sciences and Humanities, one of Japan's most prestigious publishing awards.

On October 16, 1841 (2nd day of the 9th month, Tenpō 12), Itō Hirobumi was born to Hayashi Jōzō and his wife Kotoko in the village of Tsukari in Kumage county, Suō province (now Hikari city, Yamaguchi prefecture). His childhood name was Risuke. They were a farming family, but to support the household his father served a man named Itō in the castle town of Hagi. When Hirobumi was still very young, his whole family was adopted into and given the name of the Itō family. After the adoption, Hayashi Risuke’s name was changed to Itō Risuke, and later to Itō Shunsuke (1858) and then to Hirobumi (around 1869). Becoming part of the Itō family brought them into the samurai class, albeit at the bottom level. The head of the adoptive Itō family was Naoemon, a low-ranking retainer (chūgen) of the Choshu domain. The categorization of families immediately following the 1868 Meiji Restoration identified low-ranking families like the Itōs as “sotsuzoku” as distinct from other former samurai houses known as “shizoku.”

In 1856 (Ansei 3), Itō Hirobumi was sent by the Chōshū domain to Sagami province on guard duty at Edo Bay (now Tokyo Bay). There, in the second month of 1857 (Ansei 4), Kuruhara Ryōzō (1829–62) was assigned to head the guard at Sagami. A younger brother-in-law of Kido Takayoshi (Kōin; 1833–77), one of the leading figures in the Meiji Restoration, Kuruhara liked Itō and took good care of him, and the encounter was to greatly influence Itō’s career.
A letter home affords a glimpse into Itō as a knowledge-hungry teenager with high aspirations. He wrote, “Kuruhara Ryōzō-sama, my superior, has been introducing me to some reading matter and I have been working particularly hard these days.”1 A smile-provoking passage at the end of the letter reads:

This is a personal thing, but I am embarrassed that my clothes have become too small. Please tell this to Grandma [Itō’s adoptive grandmother] and Mother. I am also a big eater, another embarrassment. I’s afraid both of these make me a laughing stock.2

In the ninth month of the same year, Itō was released from his assignment and he returned to Chōshū carrying a letter of introduction to the scholar, political reformer, and activist Yoshida Torajirō (1830–59; widely known as Shōin, one of his literary names), written by Kuruhara. In Hagi, Itō visited Shōin and requested that he be allowed to study under the great teacher at his private academy, Shōka Sonjuku (“village school under the pines”). Some time after he was admitted, Itō wrote to a friend with whom he probably became acquainted while on guard duty in Sagami province. The two apparently had trained together under Kuruhara. Vividly expressing the intellectual excitement he felt about his studies and all around him at the academy during his early days there, Itō wrote,

Literature is flourishing here. There is no one who is not always reading something. All of Matsumoto village is alive with our academy Shōka Sonjuku. We students read day and night. I urge you, too, to keep reading and studying. I don’s for a moment think you are neglecting your studies, but I do believe it is very important.3

Shōka Sonjuku was a tiny private academy far from Kyoto or Edo, but it produced many of the determined and capable activists (later known as shishi) who became major players in the last days of the Tokugawa shogunate and the restora-tion of the emperor to the center of government. Among them were Kusaka Genzui (1840–64), Takasugi Shinsaku (1839–67), Maebara Issei (1834–76), Yamagata Aritomo (1838–1922), and also Itō Hirobumi. What kind of relationship did Itō have with his teacher Shōin? We can begin to formulate an answer by considering the death of Shōin, who was eventually imprisoned for treason, taken to Edo, and executed in the Ansei Purge of 1858. Itō happened to be in Edoasanatten dantto Kido Takayoshi . It was Itō, Kido, and a few others who retrieved Yoshida Shōin’s body and gave him a proper funeral.
One can imagine the shock experienced by the young and sensitive Itō upon learning of the execution and seeing the dead and cold headless body of the teacher he had respected so deeply. From that point, working behind the scenes, he became deeply involved in the movement fired by Chōshū activists to forcibly rid Japan of the presence of Western powers and overthrow the shogunate. He had a part in an abortive attempt in 1862 to assassinate Nagai Uta (1819–63), a high-ranking Chōshū official.4 Late that year a band of activists organized by Takasugi Shinsaku burned the British legation then under construction at Goten’yama in Shinagawa, Edo. Itō took part in that act of arson, and a few days later, together with Yamao Yōzō (1837–1917),5 he assassinated Japanese classics scholar Hanawa Jirō Tadatomi (1808–62), son of the eminent scholar Hanawa Hokiichi, believing a false report that Hanawa was seeking ancient precedents for dethroning an emperor. Among all the prime ministers of Japan, Itō is the only one known to have killed a person outside the battlefield (except Kuroda Kiyotaka [1840–1900], who was rumored to have beaten his wife while drunk, resulting in her death).
Figure 1.1 Yoshida Shōin (1830–59).
Source: Photograph courtesy of the National Diet Library of Japan.

For a period following Shōin’s death, Itō was unmistakably a terrorist. Fueling his acts of violence was the sonnō jōi ideology—“Revere the emperor, expel the barbarians [Westerners]”—preached by Shōin during the years prior to his early death. This was an exhortation to overthrow the shogunate by force. The leaders of the Chōshū domain would have none of it, and so Shōin turned to dissident, out-of-power sympathizers to build a movement that he believed would rise like a flood tide for revolution. This, Shōin eagerly hoped, would be the grassroots uprising (“sōmō kukki”) that would turn the tide. Itō was right there in the thick of the movement. Yet, there was a vast difference in temperament between teacher and student. Even while he sympathized with Shōin’s ideology, Itō kept a discreet distance from his teacher while the latter was alive.
Shōin described Itō as a “shūsenka,” a negotiator.6 He also said about Itō, “He is of a petty official rank but enjoys himself with his colleagues. He is not very talented and is slow in learning. But he is serious-minded and modest. I like this very much.”7 Shōin saw Itō as a diligent and cheerful student and an untalented, simple, and honest son of a low-ranking foot soldier. As suggested by this appraisal, Shōin might have thought Itō able to become a competent bureaucrat skilled at negotiating. He most likely did not consider Itō capable of leading the management of the state.
How did Itō remember his teacher? In his later years he described Shōin as being “in no way an advocate either of expelling Western influences or overthrowing the shogunate,” but, Itō said, “He was extreme. He sometimes did things at his own discretion without realizing the real intentions of the Chōshū government, thus getting the government into trouble.” Shōin was like “the head of a political party today,” Itō observed, and added that the anti-Western “expel-the-barbarians ideology of those days was entirely emotional; it had nothing to do with thoughtful political calculations.”8
In the same account Itō commended Nagai Uta (in whose abortive assassination plot he himself had taken part all those years before) for his sharp insights:

Nagai believed Japan should be unified at all costs. Regardless of whether it opened its doors or kept them closed, the nation first needed to unite the imperial court and the shogunate and then decide which way to go. Otherwise Japan would never be either a genuinely open or genuinely closed country. In any case, Nagai’s primary objective was to bring together all of Japan as a nation.”

Itō concluded that Nagai “saw through things very clearly for a man of those days.9 Itō saw in Nagai a man whose “political strategy” was decisively informed by level-headed deliberation on the future of Japan, and he found more sympathy with this than with the radical idealism of Shōin. These recollections are clear testimony to the character of Itō as a statesman. It is safe to say that, as in his commendation of Nagai, what Itō meant by “political strategy” was not clever tactical maneuvering but thoughtful consideration of policy. Itō was a thinker who, while keeping to his political ideals, worked tirelessly to reconcile the competing interests of the various forces in play in his time and took pains to ensure that nothing he ever did or said could be construed as coming from irrational idealism. In that sense, Itō and Shōin were of two entirely different minds that could not possibly understand each other. Itō began to truly find himself only after he had broken free of Shōin’s influence.

Smuggled out to Britain

Having been introduced to the world of learning by Kuruhara and Shōin, Itō was eager for more. His next big step was to somehow get to Britain, but anti-Western feeling in Japan was at a peak and the official policy of seclusion was still in effect, so leaving the country involved subterfuge. One such project underway in the Chōshū domain was a secret plan to send retainers to study in the West. Sufu Masanosuke (1823–64), a high official in the domain government, believed their objective was to prepare the country:

I think Chōshū needs tools. By “tools” I mean human tools. Considering all that is happening in our country today, many domains are actively supporting the movement to restore the emperor to the seat of government and exclude Westerners from the land, but much of that activity is just a show of the valor of Japan. The day is sure to come when there will be active interaction among countries. When that time comes, if we still know little of things Western then our country will be at a serious disadvantage. In order to prepare the tools we need to use on that day, I want to send Nomura Yakichi and Yamao Yōzō to Britain.10

Ordered by the domain leaders to become human “tools,” prepared to absorb...