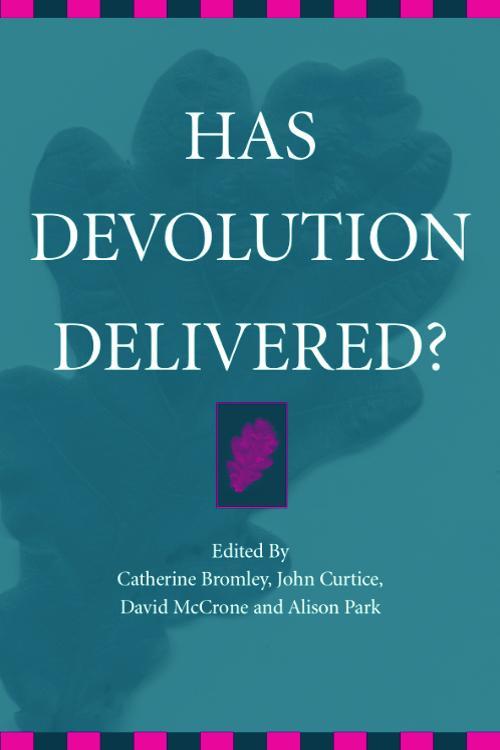 One of the key aims of devolution in Scotland was to change the way people felt about their country and the way they were governed. This book draws on a unique range of Scottish Election Studies and Scottish Social Attitudes surveys to explore the early success – or otherwise – of devolution in meeting this objective. It asks how the Scottish public has reacted to the initial experience of devolution, and the lessons this experience might have for the future of devolution.The following questions are considered:• How have public attitudes towards the governance of Scotland within the Union evolved from pre-devolution to the end of the first term of the Scottish Parliament?• What has happened to support for the principal advocates for leaving the Union, the SNP?• Why are fewer people voting in devolved elections than in UK elections?• To what degree does the behaviour of those who vote reveal a sense of involvement in the work of the Parliament?• What are voters' attitudes to the additional member electoral system?• Who are regarded as fellow Scots by those who all themselves 'Scottish'?• What are Scots' attitudes towards the Pakistani and English minorities in Scotland?Drawing on rich sources, this book presents a comprehensive and complete analysis of the Scottish public's evolving view of devolution.Key Features:• Provides a short history of devolution including how the 1999 and 2003 elections were fought and their outcomes• Looks at public attitudes to 4 key objectives many hoped devolution would achieve: (i) a better-governed country; (ii) a public more involved in how the country is governed; (iii) an electorate with more influence; (iv) the development of open civic nationalism, not one based on narrow notions of ethnicity• Asks what we should expect of devolution over the next decade based on what we have learnt about public opinion in Scotland• Written by an established team of writers known for their work in Scottish surve