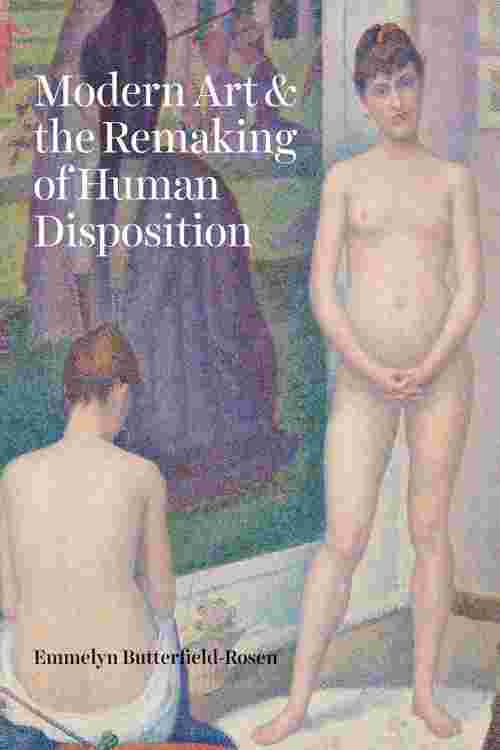 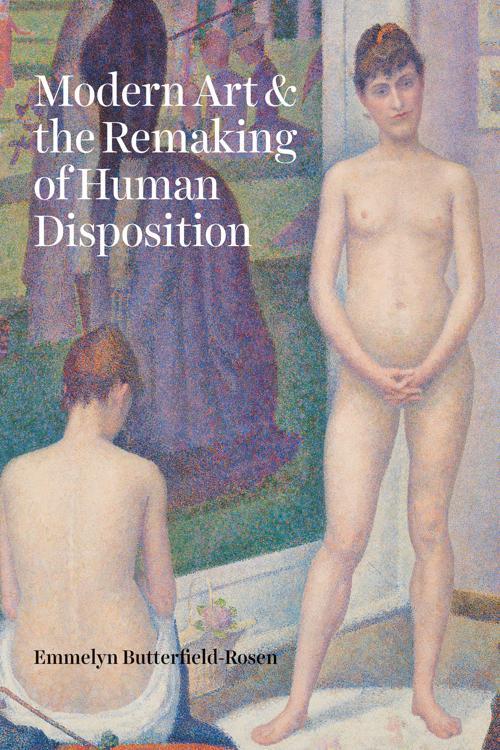 How artists at the turn of the twentieth century broke with traditional ways of posing the bodies of human figures to reflect modern understandings of human consciousness. With this book, Emmelyn Butterfield-Rosen brings a new formal and conceptual rubric to the study of turn-of-the-century modernism, transforming our understanding of the era's canonical works. Butterfield-Rosen analyzes a hitherto unexamined formal phenomenon in European art: how artists departed from conventions for posing the human figure that had long been standard. In the decades around 1900, artists working in different countries and across different media began to present human figures in strictly frontal, lateral, and dorsal postures. The effect, both archaic and modern, broke with the centuries-old tradition of rendering bodies in torsion, with poses designed to simulate the human being's physical volume and capacity for autonomous thought and movement. This formal departure destabilized prevailing visual codes for signifying the existence of the inner life of the human subject.Exploring major works by Georges Seurat, Gustav Klimt, and the dancer and choreographer Vaslav Nijinsky— replete with new archival discoveries— Modern Art and the Remaking of Human Disposition combines intensive formal analysis with inquiries into the history of psychology and evolutionary biology. In doing so, it shows how modern understandings of human consciousness and the relation of mind to body were materialized in art through a new vocabulary of postures and poses.

Publisher
University of Chicago Press
Year
2021
ISBN
9780226745183
Topic
Art
Subtopic
Art General
“I have committed myself to four great canvases of combat [grandes toiles de lutte], if you permit me to speak of them that way, and I prefer them to all my landscape studies [études de paysage].”1 With this preamble, Georges Seurat began the only summary he ever gave of his aesthetic theory, which he composed in 1890, six months before he died suddenly of diphtheria at the age of thirty-one. Although Seurat eventually crossed out the second half of the sentence, and never delivered his statement to the journalist who had solicited it, this assertion vividly communicates his deep investment in figure painting, communicated here with a phrase that invokes both violent conquest and personal crusade: “grandes toiles de lutte.”2
Central to Seurat’s radical aesthetic agenda, which launched the vanguard movement that came to be named Neo-Impressionism, was an emphatic reinstatement of the academic hierarchy of genres that had been dismantled by the preceding Impressionist generation. Seurat’s Un Dimanche à la Grande Jatte–1884 (see fig. 1) emerged as the “manifesto painting” of Neo-Impressionism.3 It “aimed, as did few other paintings in the late nineteenth century, to be the great tableau . . . to lay claim to the significance of a museum space,” as Martha Ward has stated.4 Similarly, André Chastel singled out Seurat as the first in his generation to be “haunted” by the notion of “la ‘grande composition.’”5 To comprehend the complex implications of Seurat’s investment in this notion, it is crucial to foreground a point that has often been glossed over: for Seurat, as for prior generations of academic painters, the human figure—above animals, plants, or inanimate objects—was an obligatory component of any composition that was to be regarded as “grand,” whether in terms of physical size or aesthetic significance.6
During his youth, Seurat assiduously read the works of Charles Blanc, one of the most prominent writers on art history and aesthetics in late nineteenth-century France, who served as director of the École des Beaux-Arts between 1848 and 1851 and again from 1870 to 1873.7 Numerous scholars have emphasized that Seurat first learned of Michel-Eugène Chevreul’s laws of simultaneous contrast of color while reading Blanc’s major theoretical text, the Grammaire des arts du dessin (1867). The overarching anthropocentrism of Blanc’s aesthetic system is less often acknowledged, though it was equally formative for Seurat’s Neo-Impressionist aesthetic.8 In the Grammaire and elsewhere, Blanc insisted upon the primacy of human beings over all other artistic subject matter. In 1866, for instance, he passionately defended the academic hierarchy of genres, recapitulating a doctrine first officially formulated by André Félibien in 1667. His defense succinctly summarizes the core assumption underlying the French academy’s long-standing practice of ranking painters of the human figure as “much more excellent than all others.”9

At the risk of coming to blows with the critics in love with equality in art, we gently remind them that there is a gradation in the kingdom of nature, and if the purpose of art is to express life . . . the human figure is the most exalted image an artist can propose for a model, because it is a summation of all anterior creations and, filling the immense space that separates intelligence from vegetation, it manifests the highest degree of life, which is to say thought [le plus haut degré de la vie, qui est la pensée]. To see it only from a plastic perspective, there is in the human figure such a prodigious variety of forms, of contours, of depressions, of projections, of attitudes, of movements, of nuances, that the Greeks needed ten or twelve generations, adding study upon study, genius after genius, to begin to possess a perfect comprehension of a perfect man. Similarly, in the Renaissance, more than a century was needed before one was able to place a human figure on the weight of his feet . . . . Therefore, if the greatness [grandeur] of painting is measured by the difficulty of its enterprise, it is impossible to equate, to give equal merit, to landscape and the human figure.10

Twenty years after Blanc published this statement, the Grande Jatte debuted. With this canvas, Seurat inaugurated a movement that forcefully reasserted the traditional primacy figure painting had held within academic aesthetics. And yet, part of the polemical, programmatic aspect of Seurat’s manifesto painting was that it seemed to prioritize the human figure on a basis entirely different from the one Blanc had advocated, one no longer wedded to a notion of thought as the fundament of human existence.
Seurat had an “appetite for contradiction,” according to his friend Paul Signac.11 That appetite is nowhere more evident than in the contradiction at the heart of his figure painting practice. This basic paradox structures his oeuvre: Seurat returned to the anthropocentrism of the academic tradition in which he was schooled, while simultaneously devising visual strategies that seemed to deny or degrade precisely that “highest degree of life” that previously, as Blanc asserted, guaranteed the human figure’s “exalted” status as the preeminent class of pictorial content. Previous centuries of Western figural art, up through and including the moment of Impressionism, could be understood to share a guiding principle, expressed succinctly in Ludovic Vitet’s 1861 history of the French Académie: an artist who represents the human figure must “always remember [he] draws a man, that is to say an intelligent and impassioned creature, not a banal and mechanical being.”12 Seurat’s approach to human form challenged this conception of personhood. If—as Hippolyte Taine proposed in the opening lines of On Intelligence, his 1870 survey of new psychological research—someone were to stand atop the Arc de Triomphe and look down at the minuscule dots of people walking on the street below, they would imagine each dot as “a living body, with active members, a refined economy of organs, a thinking head, driven by some interior desire or plan, in short, a human person.”13 This definition underwent a formal cancellation in the Grande Jatte.
Seurat began his career as a “regular and submissive” pupil at the École des Beaux-Arts (fig. 10), where for nearly four years he drew and painted on a daily basis from nude models and antique casts.14 But his manifesto painting conspicuously abandoned the proficiency of figural mimesis that, as Blanc recounted, Western art had achieved progressively over generations and centuries. Relinquishing the hard-won mastery of the human body’s “prodigious variety of forms, of contours, of depressions, of projections, of attitudes, of movements,” the Grande Jatte instead adopted a rigid, repetitive, formally abbreviated mode of figural presentation that startled nineteenth-century viewers with its seeming technical and expressive crudeness.
Despite a general consensus that Seurat represents a dramatic departure from prior regimes of figural representation, art history has never specified the precise formal mechanisms that constitute his innovative approach to the human form, beyond suggesting that the Grande Jatte’s novel technique of figuration marks the canvas as “the first major statement of a new variant of ‘primitivism. ’”15 Nor has art history acknowledged that, when the Grande Jatte debuted, its technique of figuration instigated a major critical dispute about the aims and aesthetic effects requisite to figure painting. This dispute grew increasingly urgent with the painting’s subsequent exhibitions at the Salon des Indépendants of August 1886 in Paris and the Salon des XX in Brussels in 1887.
The debates around the Grande Jatte’s technique of figuration are vitally important not only for grasping the fraught status of the human figure within Seurat’s oeuvre but for understanding more broadly how at the turn of the century some of the most basic objectives of figural representation were reconceptualized by modern artists. At its core, the dispute around the Grande Jatte concerned the presumed obligation that an artist should endeavor to portray the indwelling physical and intellectual liveliness of the human being. While this debate was, in one sense, a debate about formal conventions, it was also inextricably bound to larger questions about how to define and represent human interiority.

A “Reprinted, Corrected, Singularly Augmented Edition of the Grande Jatte”

Among the seven figure paintings Seurat completed before his death, one holds singular importance for comprehending the problematic status the human figure came to assume within his oeuvre. Exhibited in 1888 under the idiosyncratic title Poseuses—“Posers,” not “Models,” as the title is often improperly translated—Seurat’s composition of three nude models assembled in his studio in front of a section of the Grande Jatte occupied him longer than any other of his notoriously labor-intensive canvases of combat.16 Produced over two years in “cloistered” secrecy, Poseuses (fig. 11) was a uniquely introspective as well as retrospective project—a “grande toile de lutte” that self-consciously answered, and thematized, the dispute about figure painting that had emerged from the Grande Jatte’s contentious reception.17
A terse, two-line review published in 1889 aptly summarizes the discursive structure of Poseuses; it identifies the canvas as “a reprinted, corrected, singularly augmented edition of the Grande Jatte.”18 Pointedly deploying the terminology of print, the turn of phrase seems to allude to the influence of Seurat’s critics, underlin...