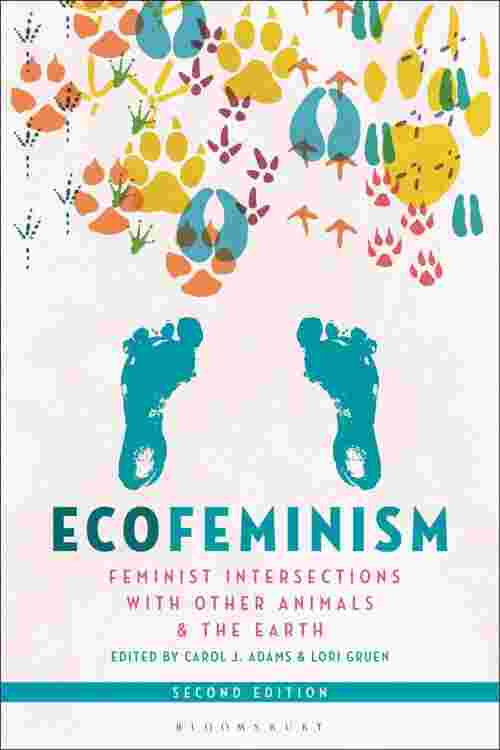 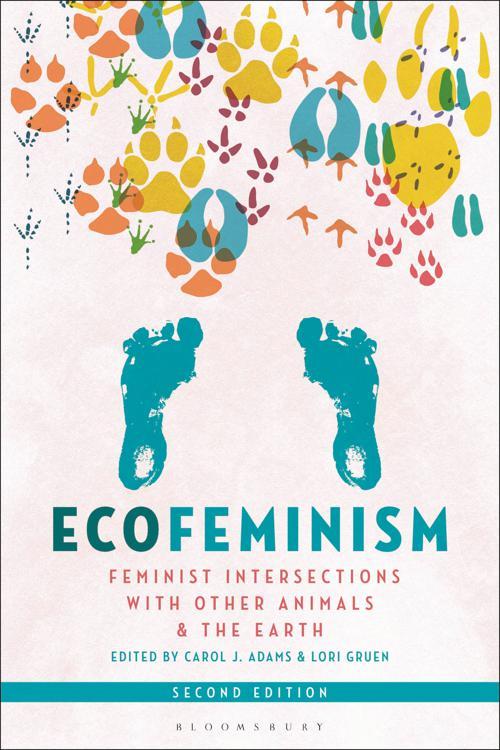 This new edition of Ecofeminism: Feminist Intersections with Other Animals and the Earth begins with an historical, grounding overview that situates ecofeminist theory and activism within the larger field of ecocriticism and provides a timeline for important publications and events. Throughout the book, authors engage with intersections of gender, sexuality, gender expression, race, disability, and species to address the various ways that sexism, heteronormativity, racism, colonialism, and ableism are informed by and support animal oppression. This collection is broken down into three separate sections: - Affect includes contributions from leading theorists and activists on how our emotions and embodiment can and must inform our relationships with the more-than-human world
- Context explores the complexities of appreciating difference and the possibilities of living less violently
- Climate, new to the second edition, provides an overview of our climate crisis as well as the climate for critical discussion and debate about ecofeminist ideas and actions Drawing on animal studies, environmental studies, feminist/gender studies, and practical ethics, the ecofeminist contributors to this volume stress the need to move beyond binaries and attend to context over universal judgments; spotlight the importance of care as well as justice, emotion as well as reason; and work to undo the logic of domination and its material implications.

Carol J. Adams and Lori Gruen
Ecofeminism is a robust philosophical practice with engaged, activist roots. Ecofeminists can be found around the world—planting trees in Africa, protecting indigenous crop seeds in India, challenging cattle-raising economies in South America, rescuing animals from catastrophic fires in Australia, working to end environmental racism in the United States, leading lively discussions on college campuses, pushing for climate action in legislative bodies, and fighting the earth destroying forces of patriarchal capitalism in the streets.
Ecofeminism posits that the domination of “nature” is linked to the domination of “women” and that both dominations must be eradicated. (Of course there are a number of ways to understand both “nature” and “women”.) Analyzing mutually reinforcing logics of domination and drawing connections between practical implications of power relations has been a core project of ecofeminism. Ecofeminism has a rich history in feminist struggles against militarism, capitalism, racism, colonialism, environmental destruction, and patriarchy. Ecofeminists, over decades, have addressed these overlapping, interconnecting issues. Here are just a few examples:
Rosemary Radford Reuther (1975)
Women must see that there can be no liberation for them and no solution to the ecological crisis within a society whose fundamental model of relationships continue to be one of domination. They must unite the demands of the women’s movement with those of the ecological movement to envision a radical reshaping of the basic socioeconomic relations and the underlying values of this society.
Karen Warren (1987)
Ecological feminism is the name given to a variety of positions that have roots in different feminist practices and philosophies. These different perspectives reflect not only different feminist perspectives (e.g., liberal, traditional Marxist, radical, socialist, Black, and Third World), they also reflect different understandings of the nature of and solution to pressing environmental problems. Despite important differences among ecofeminists and the feminisms from which they gain their inspiration, there is something all ecofeminists agree about; such agreement provides a minimal condition account of ecofeminism: there are important connections between the domination of women and the domination of nature, an understanding of which is crucial to feminism, environmentalism, and environmental philosophy. A main project of ecofeminism is to make visible these “woman-nature connections” and, where harmful to women and nature, to dismantle them.
Ynestra King (1989)
The goals of harmonizing humanity and nonhuman nature, at both the experiential and theoretical levels, cannot be attained without the radical vision and understanding available from feminism. The twin concerns of ecofeminism – human liberation and our relationship to nonhuman nature – opens the way to developing a set of ethics … Ecofeminism uses its ecological perspective to develop the position that there is no hierarchy in nature: among persons, between persons and the rest of the natural world, or among the many forms of nonhuman nature … Ecofeminism draws on another basic principle of ecological science – unity in diversity – and develops it politically.
Vandana Shiva and Maria Mies (1993)
Ecofeminism is about connectedness and wholeness of theory and practice … We see the devastation of the earth and her beings by the corporate warriors, and the threat of nuclear annihilation by the military warriors, as feminist concerns. It is the same masculinist mentality which would deny us our right to our own bodies and our own sexuality, and which depends on multiple systems of dominance and state power to have its way.
Ariel Salleh (1997)
In a time of ecological crisis, ecofeminists worldwide have become agents of history/nature. They give voice to a subversive politics, aware of its own situatedness and transitionality. In epistemological terms, I would say that ecofeminism expresses an embodied materialism … Ecofeminism is more than an identity politics, it reaches for an earth democracy, across cultures and species.
Criticisms of the white, settler, patriarchal worldview and its impacts on all women, people of color, poor people, other animals, and the more-than-human world, in ways that overlap and intersect, was not new, but the coining of the word “ecofeminism” provided a term for discussing the connections.

Ecofeminist philosophy often starts with a discussion of the value dualisms that have structured Western thought. Karen Warren describes these value dualisms as “disjunctive pairs in which the disjuncts” are oppositional, exclusive, and organized hierarchically (1997, 20). Val Plumwood elaborates, “Dualism makes difference the vehicle for hierarchy, it usually does so by distorting difference” (1993, 59). She explains that a dualism “results from a certain kind of denied dependency on a subordinated other. This relationship of denied dependency determines a certain kind of logical structure, in which the denial and the relation of domination/subordination shape the identity of both the relata” (41). The dualistic structure of Western thought constructs “a devalued and sharply demarcated sphere of otherness” (41).
Among the dualisms Warren, Plumwood, and other ecofeminists identify are culture/nature; male/female; mind/body; master/slave; reason/emotion; and human/nonhuman. The purpose of the dyads is not only to demarcate and perpetuate difference, but to mark those with power and those available to be exploited by those with power. These binaries also constrain our thinking about other ways to understand our relationships with each other, other animals, and the rest of nature. Critical analyses of and resistance to dualistic and hierarchical conceptual frames are central to ecofeminist philosophy. As Ynestra King noted in 1983, the dialectical relationship between the subjugation of women and the subjugation of nature is supported by these hierarchical dualisms and must be resisted at all levels.
Unfortunately, ecofeminist criticisms of these dualisms sometimes have been construed as endorsements. Ecofeminist analysis has often been mistaken for a prescription of favoring the abject sides of the man/woman and culture/nature binaries, in an attempt to reverse the value dualism. That those considered women are thought to be closer to nature is one of the ways that patriarchal power has diminished both. Early on, there were some ecofeminists who sought to revalue women and nature by celebrating the constructed connection, while also critically analyzing the ways that this association justified domination. There isn’t anything “essential” about these connections, and to think that elevating those who are devalued is perpetuating the dualism is one of the ways that dualistic thinking infects our imaginations. Value dualisms that empower one side and dominate the other are necessary for maintaining oppression, both because, as Warren suggested, they are exclusive and because they maintain fictitious binaries. For instance, the man/woman dualism inscribes a gender binary that precludes the possibility of gender fluidity, reifies a fiction that one must be either/or, and fails to notice the fact that other-than-human beings don’t constitute their lives via human binary conceptions of gender. Using common terminology, like man and woman, should not be construed, without further discussion, as accepting a binary construction of gender nor as an endorsement of the patriarchal values associated with the terms.
Of course, ecofeminists recognize that every claim we make is unavoidably influenced by a range of cultural understandings and valuations. Ecofeminists, like everyone else, acquire particular views in particular places at particular moments in time. The culture, history, and society in which we emerge as thinking, feeling, acting embodied subjects shapes our concepts, opinions, hopes, and aspirations. How we categorize and interpret the world around us has much to do with our context which in turn shapes our understanding, explanations, and interpretations of the world. Given that people are situated in various contexts, ecofeminists reject “essentialist” claims and claims to universal applicability. In addition, ecofeminist theory stresses the importance of concrete and contextual mutual identification and mutual affirmation, of interdependence, and of empathy and compassion. Ecofeminist philosophy is responsive to the existence and desirability of other-regarding interests and is committed to being as inclusive of different lives and experiences as is possible.
One of the important ways that ecofeminists have sought to value different lives and different experiences is by rejecting hierarchical views of value. Recent work exploring parallels between animalization, dehumanization, and racism further illuminates why hierarchical approaches pose particularly troubling problems.1 Consider the hierarchical Great Chain of Being. Though this idea has historically been used for a variety of different purposes, basically the Great Chain of Being puts white cis-men right below God at the top of a supposedly “natural” hierarchy, with other humans below them, animals below the humans, plants below the animals, and inanimate things below plants.
Figure 1.2 Mark Dion. Scala Naturae. 1994. Painted wooden structure, artifacts, plant specimens, taxidermy specimens, and bust 117 x 39 3/8 x 93 3/4 inches; 297.2 x 100 x 238.1 cm. Courtesy the artist and Tanya Bonakdar Gallery, New York / Los Angeles.
Within the categories that contain humans and animals there are often thought to be “natural” hierarchical divisions too. Claire Jean Kim discusses the ways that scientific racism operates in these long-standing fictions, where white men are above non-white men and then below those men are African men, more or less equal to chimpanzees, gorillas, and orangutans. She writes, “the ape comparison was more than just a forceful metaphor meant to denigrate … the Negro.” It was the white man’s placement of the African man “in the human/animal borderlands where he was variously seen as subhuman, not quite human, almost animal, actually animal” (Kim 2015, 35).
Value hierarchies rank beings in virtue of the qualities or capacities they might share with those at the top of the hierarchy. This hierarchical way of thinking is central to liberal humanist scholarship as well as mainstream discussions of animal ethics. Hierarchical ideology can appear expansive, the men on top may want to include people of other races in political communities because they share qualities that those on top find important or they want to include animals in moral considerations because like humans they are sentient and experience pains and pleasures. These hierarchical ways of thinking often get taken up by those who mean well, but they nonetheless erase other ways of living, experiencing the world, and valuing ourselves and our relationships. These hierarchies don’t simply enable, but also reify ableism, heterosexuality, settler colonialism, and whiteness. And they are fundamentally anthropocentric—as it is human qualities that are those that form the pillar of the hierarchy.

Many feminists have worked a...