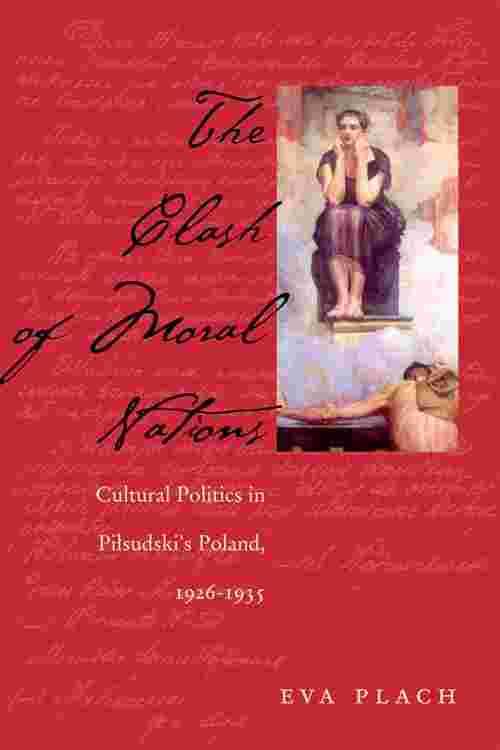 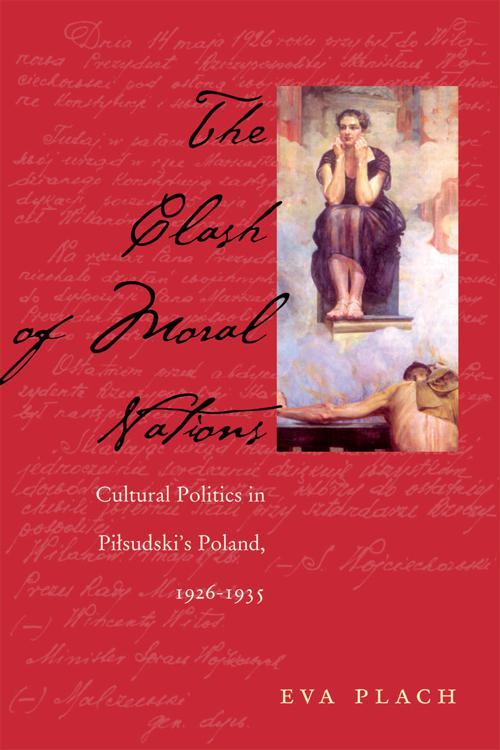 The May 1926 coup d’état in Poland inaugurated what has become known as the period of sanacja or “cleansing.” The event has been explored in terms of the impact that it had on state structures and political styles. But for both supporters and opponents of the post-May regime, the sanacja was a catalyst for debate about Polish national identity, about citizenship and responsibility to the nation, and about postwar sexual morality and modern gender identities. The Clash of Moral Nations is a study of the political culture of interwar Poland, as reflected in and by the coup. Eva Plach shifts the focus from strictly political contexts and examines instead the sanacja’s open-ended and malleable language of purification, rebirth, and moral regeneration. In tracking the diverse appropriations and manipulations of the sanacja concept, Plach relies on a wide variety of texts, including the press of the period, the personal and professional papers of notable interwar women activists, and the official records of pro-sanacja organizations, such as the Women’s Union for Citizenship Work. The Clash of Moral Nations introduces an important cultural and gendered dimension to understandings of national and political identity in interwar Poland.

STANISŁAW KOZICKI (1876–1958), a prominent politician of the nationalist-right camp, reflected in 1932 on the numerous challenges that contemporary Poland faced and offered the following summation: “In addition to everything that is going on there [in western Europe after the Great War], we are undergoing a transition from slavery to freedom and are exerting a great effort to organize our own state. Can one really be surprised that the transitional period is lasting longer and is more complicated?”1 Though it was unpleasant and troubling, it was natural enough, Kozicki reasoned, for the Second Republic to confront monumental problems on all fronts and at all levels. Commentators like Kozicki moved effortlessly from blaming the lingering effects of the partitions for the problems evident in the Second Republic, to blaming the Great War and the subsequent border wars, the political structures of the new state, the ethnic minorities, the international situation and geopolitics. But commentators also impugned something far less tangible and potentially far more explosive: the moral health of the nation. A vocabulary of infestation and filth, of healing, good ethics, and moral rigor, was heard frequently in the press of the early independence period as many looked to the moral realm as possessing great explanatory power. In an atmosphere of economic uncertainty, social tension, and political animosity, cultural and moral visions of newly independent Poland were bound to clash. Bit by bit, the contours of a discursive moral panic developed alongside the political crises, the social unrest and the economic ruin. Within intellectual circles of the Second Republic, debates raged about the quality of the nation’s moral fabric.
Just as they did in western Europe, debates about Poland’s moral health developed with a ferocious intensity right from the start of the postwar period. Evident in the Second Republic before the May coup of 1926, these debates were instrumental in laying the groundwork for an intensification of interest in moral themes after May 1926. If the May coup could capitalize on a feeling of disaffection and malaise, as I argue it did, then this was possible only because the foundations for a nationwide forum on moral health had been laid earlier. Piłsudski’s coup and the proclamation of a sanacja would provide a resonant focus for discussions about morality—political, social, and sexual—that had been circulating in the Second Republic ever since independence. The sanacja could and did function rhetorically as a moment of rebirth precisely because many people had become accustomed to thinking about the need for a dramatic cultural and social transformation and had become comfortable with a language of crisis, moral degeneration, spiritual renewal, and moral rejuvenation. The sanacja grew out of and reflected a deep-seated moral crisis, while it also acted as a catalyst for an invigorated focus on moral questions.

Moral Citizenship in the Second Republic

That the partitions had imprinted many undesirable features on the Second Republic was beyond dispute: the long partition era had deprived Poles of the experience of state administration and political organization and of opportunities for social cooperation and growth. Thereafter it became standard fare for commentators to invoke the partitions when trying to explain the political, social, and economic problems that plagued the Second Republic. At the same time, some commentators in the Second Republic noted that certain aspects of partition-era patriotism had been passionate and ideal, and that the Second Republic needed to emulate the best features of this national devotion if it were to survive the challenges of the modern period. A fantastic legend about consummate partition-era commitment to the nation developed in independent Poland (although only a very small elite actually expressed this unwavering national devotion during the partition period) and became a measure by which to gauge contemporary patriotism. Citizenship in the Second Republic was recast as much more than a constitutionally regulated designation; it acquired the status of a moral category,13 a duty to the nation and to Polish history that, if ignored, would result in a tragedy on the scale of the late-eighteenth-century partitions.
In the postwar era of national soul-searching about what it meant to be a Pole living in a resurrected Poland, certain expressions of partition-era Polish womanhood became for some an especially revealing marker of national commitment and, it follows, of the health of the nation generally. With the partitions, the men of the nobility and the political institutions they had dominated in the Polish-Lithuanian Commonwealth lost their special and publicly recognized status. And while men went off to fight for Polish independence, women dominated the private sphere and turned it into a site of sedition and hope; the home became a repository of Polishness, a vital center of political and national mobilization in a patriotic spirit. Commentators from across the political spectrum in the Second Republic heralded women of the partition era for fulfilling their “natural” roles as bearers of national culture as well as for having played an indispensable role in the national struggle, for protecting national virtues, for passing along language and tradition, and thus, at the most basic level, for ensuring the very existence of the Polish nation.14
Women of the Second Republic could not but fail to measure up to the models of femininity and citizenship that had arisen out of the partition period. Some commentators in the Second Republic were quick to observe that independence-era women had too quickly become satisfied with mere formal territorial independence and with their newly won political rights, including suffrage rights; women of the Second Republic were accused of having become so enamored with the concept of rights that they forgot what responsibilities to the nation they, as women and as mothers, “naturally” possessed. Many critics emphasized that independence-era women had been lured away from husbands and children by the temptations of modern life. The effects of women’s supposed disregard for national imperatives were evident in the depth of the problems the Second Republic confronted; as a result of women’s choices, the family suffered, and the nation suffered, too.
As early as the border wars of 1919 to 1921, but after the formal declaration of Polish independence in 1918, women were already singled out for threatening to eschew their responsibilities to the nation. Contemporary women needed to be reminded of the sacrifices their foremothers had made and which they, as good and moral citizens of an independent Poland, should also make. An army poster from the border wars urged, “Be like Polish women from the past, who, without a tear, sent their most beloved to their deaths. . . . Away with rags and fashions, trite phrases and fox-trots, and that whole hideousness of a low and impoverished life. Your dance hall is an army hospital, your fashions, a headband with a cross.”15 If women needed to be reminded even during the wars over Poland’s borders that they were morally obliged to fulfill the dictates of citizenship, then it could come as a surprise to no one, the reasoning went, that during a time of formal peace after 1921, when the threats to Poland were less tangible, women continued to act with callous indifference toward the nation. Far from being unimportant, women’s behavior went to the very core of definitions of citizenship and symbolized what some believed was the lamentable state of national commitment in the independence era.16
References to the dangerous “savage mores” of the postpartition period, to the dire effects private immorality exerted on the nation as a whole, and to the need for women to take seriously their citizenship duties resonated with a dire urgency as the political and economic problems mounted in the Second Republic. The discursive attention given to gender and morality—a focus that conveyed, in turn, an anxiety about the nation generally—was especially marked in the press of the period, which, owing to its numbers and influence, came to occupy a central role in the political and cultural life of the nation.17 Almost all political groupings in the Second Republic had their own periodicals, such that reading a particular publication revealed a great deal about one’s political affiliations and ideological underpinnings.18 Divisions...