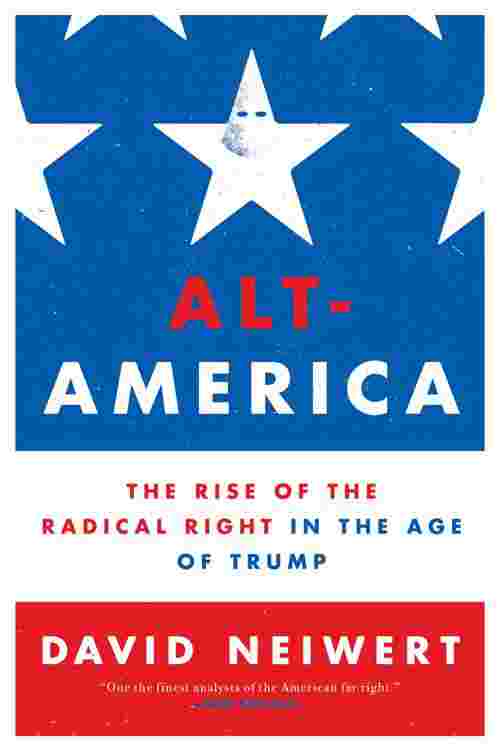 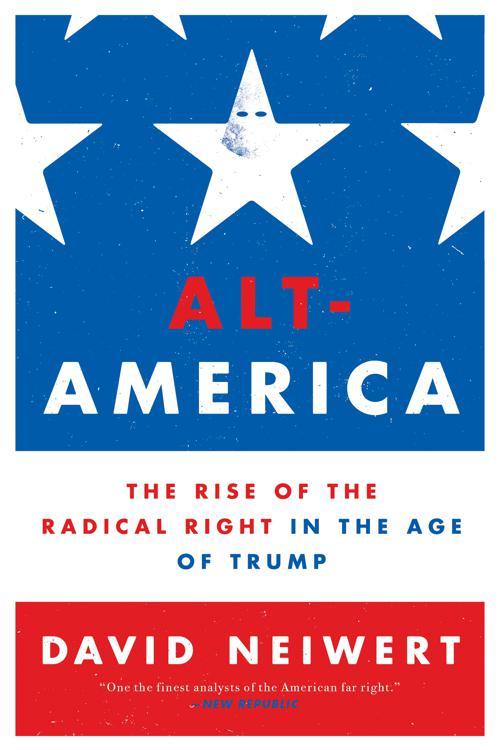 Just as Donald Trump's victorious campaign for the US presidency shocked the world, the seemingly sudden national prominence of white supremacists, xenophobes, militia leaders, and mysterious "alt-right" figures mystifies many. But the American extreme right has been growing steadily in number and influence since the 1990s with the rise of patriot militias. Following 9/11, conspiracy theorists found fresh life; and in virulent reaction to the first black US president, militant racists have come out of the woodwork. Nurtured by a powerful right-wing media sector in radio, TV, and online, the far right, Tea Party movement conservatives, and Republican activists found common ground. Figures such as Stephen Bannon, Milo Yiannopoulos, and Alex Jones, once rightly dismissed as cranks, now haunt the reports of mainstream journalism.

Investigative reporter David Neiwert has been tracking extremists for more than two decades. In Alt-America, he provides a deeply researched and authoritative report on the growth of fascism and far-right terrorism, the violence of which in the last decade has surpassed anything inspired by Islamist or other ideologies in the United States. The product of years of reportage, and including the most in-depth investigation of Trump's ties to the far right, this is a crucial book about one of the most disturbing aspects of American society.

The day after Donald Trump announced his campaign for the presidency, Dylann Roof walked into a Charleston, South Carolina, church with a gun and killed nine black people because they were black.
It was purely a coincidence that one act followed the other, hundreds of miles apart: Roof apparently knew little about Trump and was not known to be a Trump follower. Trump had never met nor had any interaction with Roof.
Yet the two acts were inextricably connected—by the events and acts that had preceded them, and by those that followed in the ensuing weeks and months. Most of all, both acts signaled, in different ways, a deep change in the American cultural and political landscape.
The American radical right—the violent, paranoid, racist, hateful radical right—was back with a vengeance. Actually, it had never really gone away. And now it had a presidential candidate.

Hopefully, he’s going to sit there and say, “When I become elected president, what we’re going to do is we’re going to make the border a vacation spot, it’s going to cost you twenty-five dollars for a permit, and then you get fifty dollars for every confirmed kill.” That’d be one nice thing.
—Supporter of Donald Trump, interviewed in the New York Times

This robocall goes out to all millennials and others who are honest in all their dealings … The white race is being replaced by other peoples in America and in all white countries. Donald Trump stands strong as a nationalist.
—William White (a white nationalist), pro-Trump robocall to Massachusetts voters
The march to victory will not be won by Donald Trump in 2016, but this could be the steppingstone we need to then radicalize millions of White working and middle class families to the call to truly begin a struggle for Faith, family and folk.
—Matthew Heimbach, cofounder of the neo-Nazi Traditionalist Youth Network, at organization’s website
Get all of these monkeys the hell out of our country—now! Heil Donald Trump—THE ULTIMATE SAVIOR.
—Tweet from the Daily Stormer, a neo-Nazi website
Donald Trump was right, all these illegals need to be deported.
—White man in Boston who with another man beat a homeless Latino to within an inch of his life with a metal pole and then urinated on him
People who are following me are very passionate. They love this country and they want this country to be great again. They are passionate.
—Donald Trump, when asked about the Boston hate crime

Thank you. It’s true, and these are the best and the finest. When Mexico sends its people, they’re not sending their best. They’re not sending you … They’re sending people that have lots of problems, and they’re bringing those problems with us. They’re bringing drugs. They’re bringing crime. They’re rapists. And some, I assume, are good people.
But I speak to border guards and they tell us what we’re getting. And it only makes common sense. It only makes common sense. They’re sending us not the right people.
It’s coming from more than Mexico. It’s coming from all over South and Latin America, and it’s coming probably—probably—from the Middle East. But we don’t know. Because we have no protection and we have no competence, we don’t know what’s happening. And it’s got to stop and it’s got to stop fast.

This was a signature trope of Trump’s campaign: Trump didn’t avail himself of the coded “dog whistle” signals that conservatives had learned to employ when they spoke about race, ethnicity, crime, and immigration. He called this kind of euphemistic prevarication “political correctness,” and he intended to smash it to tiny pieces and say what he knew his listeners already thought.
Right-wing politicians had for years relied on this coy rhetoric because naked racial attacks hurt them in opinion polls. This rhetorical dancing around also spared them from being attacked for their racism while allowing them to communicate to their own audiences that their biases aligned with those of their white suburban and rural base—which, it emerged, continued to embrace racist tropes and stereotypes about people of color, regardless of the broader social stigma in doing so.
This was made manifestly clear by the ardent following that Trump immediately developed for his “anti-PC” style of campaigning: instead of plummeting in the polls, as many expected after Trump’s wildly controversial opening speech, his approval ratings climbed. And climbed. And climbed.
Longtime nativists soon perceived in Trump a bandwagon they could jump on. Among the friends and admirers Trump acquired who were movement conservatives was one of their leading mavens, the syndicated columnist Ann Coulter. Coulter had long complained that immigration was an issue that Republicans kept overlooking and botching in national elections—because they hadn’t gone far enough to the right.
In fact, Coulter had made that very argument in a book that came out on June 1, 2015, Adios America: The Left’s Plan to Turn Our Country into a Third World Hellhole. She had been making the rounds of all the right-wing TV talk shows to promote it—and a few mainstream programs as well.
Coulter has a long history of citing far-right extremists and white nationalists in her work, and this one was no different. Retailing a hodgepodge of recycled nativist talking points, the book cited a number of white supremacist sources, and repeated the assertion of Richard Spencer, a white nationalist, that “immigration is a proxy war against America.” She also claimed in the book that Latinos sustained a “culture of misogyny.”
Coulter also credited another well-known white nationalist figure named Peter Brimelow—the founder of an openly racist website called VDare (named for Virginia Dare, the first white child born in North America)—for her anti-immigrant politics. These views were seconded by another well-known “academic racist,” Jared Taylor, who declared that with her book Coulter “has established herself as the foremost advocate for immigration sanity in America—if not the world.”
Meanwhile, on TV and elsewhere, Coulter did what she does best—serve up sound bites of outrageous commentary that stir up condemnation from mainstream liberals and that warm the hearts of her fellow conservatives. This time out, though, Coulter had grown beyond outrageous and become genuinely vicious, warning Americans they “better get used to having your little girls get raped” as a result of immigration and that “Americans should fear immigrants more than ISIS,” and sneering that Mexican culture “is obviously deficient.” She denied that there was anything bigoted about this: “Hispanics are not black,” she countered, “so drop the racism crap.”
Coulter, who had been an ardent Romney supporter, had begun to turn in Trump’s direction, telling one interviewer that a Trump-Romney ticket would stop “foreigners” from outvoting “white Americans.” It was apparently a mutual-admiration society: Coulter told a reporter that Trump had “asked for, and received, an advance copy of my book, and he told me … that he’s read the book cover to cover.” Trump tweeted out that Coulter’s book was “a great read. Good job!”
One of the solutions to immigration from south of the border was to build an effective wall along the Mexican border. “Contrary to repeated assertions that fences don’t work,” Coulter asserted, “… after Israel completed a fence along its border in 2013, the number of illegal aliens entering the country dropped to zero.”
When Trump announced his plans to run for president on June 15, he made the wall idea the centerpiece of his attack on Mexican immigration: “I would build a great wall, and nobody builds walls better than me, believe me, and I’ll build them very inexpensivel...