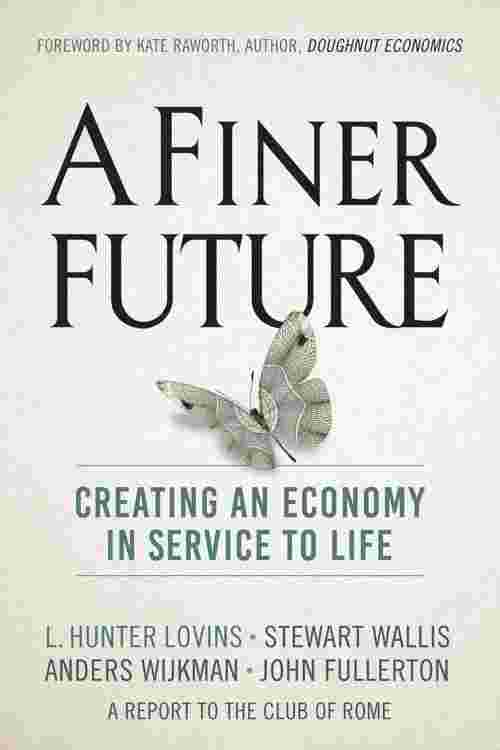 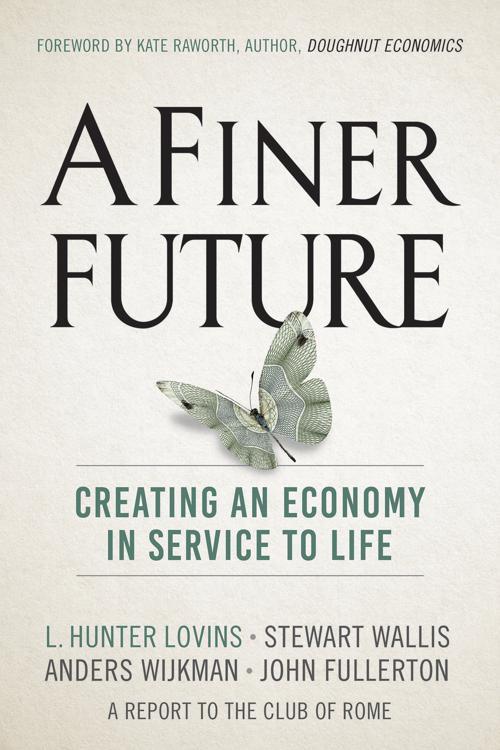 The blueprint for an inspiring regenerative economy that avoids collapse and works for people and the planet.

Humanity is in a race with catastrophe. Is the future one of global warming, 65 million migrants fleeing failed states, soaring inequality, and grid-locked politics? Or one of empowered entrepreneurs and innovators working towards social change, leveling the playing field, and building a world that works for everyone? While the specter of collapse looms large, A Finer Future demonstrates that humanity has a chance - just - to thread the needle of sustainability and build a regenerative economy through a powerful combination of enlightened entrepreneurialism, regenerative economy, technology, and innovative policy.

The authors - world leaders in business, economics, and sustainability - gather the environmental economics evidence, outline the principles of a regenerative economy, and detail a policy roadmap to achieving it, including:

Charting the course to a regenerative economy is the most important work facing humanity and A Finer Future provides the essential blueprint for business leaders, entrepreneurs, environmentalists, politicians, policymakers, and others working to create a world that works for people and the planet.

It’ll Do Til the Mess Arrives

It’s a mess... If it’s not, it’ll do til the mess arrives.
TOMMY LEE JONES1
SOME PEOPLE LOOK at the scary statistics coming at us and say, “There‘s nothing I can do about it, I’ll just party til it’s all over.”2
This is perhaps the most profoundly irresponsible thing you can do. You are the result of 4 billion years of evolutionary history.
Act like it.
Further, it is intellectually dishonest. There is a route forward. Rabbits freeze when confronted by a threat. Humans invent a new solution. Throughout our history, we have come together to create a better world. Hominids, before we were even fully human, nearly died out. Archeologists believe that the population was reduced to only a few thousand individuals.3 They survived, and you are here, because your ancestors bonded. Those individuals cared more for the well-being of their whole group than any one cared for his or her personal success.4 We, you and I, say the evolutionary biologists, are alive today because our ancestors created solutions together. The imperative to work together, to care for one another, and to begin again is in our DNA. These features, they say, are not flaws: they define what it means to be human.
It is possible for humanity to avoid collapse. We’ve done it before. We can do it again.
For this to happen, however, we need a new narrative to counter the one that says we are rugged individuals, locked in mortal competition. This myth, more than anything else, has put us in peril. This book sets forth the basics of a Finer Future, what John Fullerton calls a Regenerative Economy.5
So, brace yourself, challenge yourself, read chapter 1.
Everything is changing.
Except us.
We remain the complex, creative, courageous, fearful, insular, but remarkable creatures we have always been.
It is the world around us that is morphing at warp speed into a future we only dimly imagine.
Then turn to chapter 2 to see how we created this mess we’re in by telling ourselves a silly story. It may reassure you to realize that a small group of men crafted the narrative that has set the world on its current collision course. But if they did that, we can create a better story. Chapter 2 turns from the grim statistics set forth in chapter 1 and sketches what it will take if we are to avoid collapse.
Then smile to realize in chapter 3 that we have a better story. Because we too are changing. By facing our fears, we can evolve and gain greater consciousness. We have the ability to adapt to our new context and craft a Finer Future.

Vision is the most vital step in the policy process. If we don’t know where we want to go, it makes little difference that we make great progress.... The best goal most of us who work toward sustainability offer is the avoidance of catastrophe. We promise survival and not much more. That is a failure of vision.
DONELLA (DANA) MEADOWS1

The day dawns fine and clear. You stretch your 87-year-old bones in your bed, luxuriating in the tropical sun pouring in through the super-insulated windows in your Passivhaus co-housing unit in Indonesia.2 Initially designed for northern climates, the concept of super-efficient buildings has, with some modifications,3 transplanted well to the hotter weather of the Global South. These structures keep residents comfortable year-around4 with only solar energy gathered by rooftop units to power them. Small, but suited to your needs, your unit is part of a larger community committed to working together. This has allowed you to stay in your own home as you age, eating communally with your neighbors when you wish but able to fix your own meals in the trim kitchen when you want privacy.
You were alive in 2015, when a group of applied mathematicians released the HANDY study.5 It warned that cases of severe civilizational disruption due to “precipitous collapse — often lasting centuries — have been quite common.” The title, Human And Nature DYnamical Study (HANDY), was clearly chosen for the acronym, but the subtitle, Is Industrial Civilization Headed for Irreversible Collapse, crisply set forth the thesis. Using a NASA-funded climate model, it explored the history of collapses. It did not set out to make short-term predictions, but the warning is stark: under conditions “closely reflecting the reality of the world today...we find that collapse is difficult to avoid.”
The study described prior collapses variably as population decline, economic deterioration, intellectual regression, and the disappearance of literacy (Roman collapse), serious collapse of political authority and socioeconomic progress (repeated Chinese collapses), and disappearance of up to 90 percent of the population (Mayan). Some collapses the study profiled were so complete that the forest swallowed any trace until archaeologists rediscovered what had clearly been a complex society (many Asian collapses).
The authors concluded that despite the common impression that societal collapse is rare, or even largely fictional, collapse is real; “the picture that emerges is of a process recurrent in history, and global in its distribution.”
Historic collapses, the study argued, were neither inevitable nor natural; they were human caused. They inflicted massive misery, often for centuries following. The study identified two underlying causes of collapse throughout human history:
1. “the stretching of resources due to the strain placed on the ecological carrying capacity” [emphasis added] and
2. “the economic stratification of society into Elites [rich] and Masses (or “Commoners”) [poor].” [emphasis added]
These causes, the study concluded, have played “a central role in the process of the collapse.” This finding was reached based on all of the cases over “the last five thousand years” the authors examined.
The study elicited reams of criticism, most posted on ideological websites.6 Critics objected that the study’s use of mathematical models made collapse seem unavoidable. To be fair, the HANDY authors stated, in terms, that collapse is not inevitable.
The analysis led you to change your life. And today, in 2050, it feels very distant.
Children play outside in the central spaces, safe from cars, which, as in the early car-free city of Vauban, Germany,7 are banned from this and many neighborhoods. A few residents still own electric cars, although they pay handsomely for the privilege — and wonder why they do, as their vehicles reside in a garage where the carshare program used to live. Now almost no one drives herself: driverless cars deliver last-mile services,8 and regional transit works spectacularly well.
Today the air is clean. When you moved here, 34 years ago, 100,000 people died each year of acute air pollution across Indonesia.9 The killing smoke spread across Southeast Asia from forests burned to clear land for palm oil plantations. Since Unilever10 and other major users of the oil shifted in 2020 entirely to sustainable soy11 and algae oil, the palm oil market collapsed, except for a vibrant smallholder palm industry.12 Their trees are integrated into sustainable forestry initiatives that support rural communities. Tied closely to the ecotourism industry,13 this has enabled Indonesia to ensure that the once-endangered orangutans and tigers have plenty of forest home in which to flourish, adding to visitor appeal. Indonesia once exported almost half of the world’s palm oil.14 Unilever15 and governments like Norway’s funded the creation of an algae oil industry that now employs twice the number of people who once worked on plantations.
But it was not always so....

Collapse Is a Serious Risk

New York Times columnist Tom Friedman opened 2016 with the query: what if “the recent turmoil in international markets isn’t just the product of tremors but rather of seismic shifts in the foundational pillars of the global system, with highly unpredictable consequences?”16
He cited the bursting of the Chinese economic growth bubble,17 the likelihood of durably low oil prices,18 the end of Cold War support for banana republic nations, the rise of artificial intelligence and the destruction of the jobs market by robots,19 the dissolution of European Union20 under the flood of refugees,21 American political polarization and the resulting populism,22 and the inability of central banks to prop up faltering economies.23 Are these tectonic plates all movi...