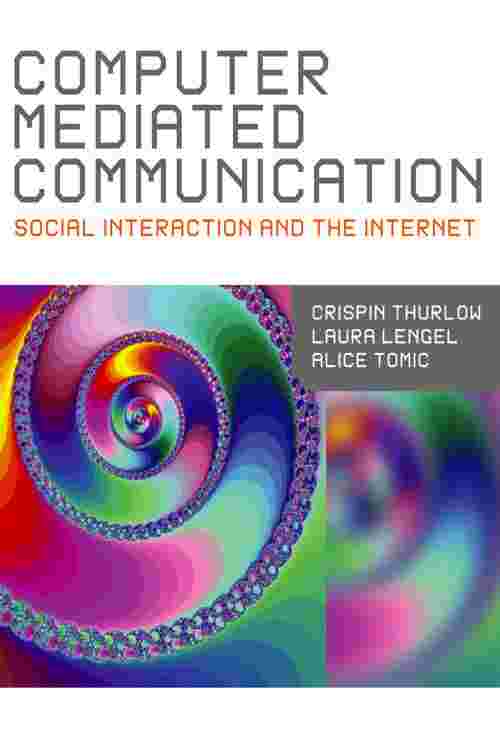 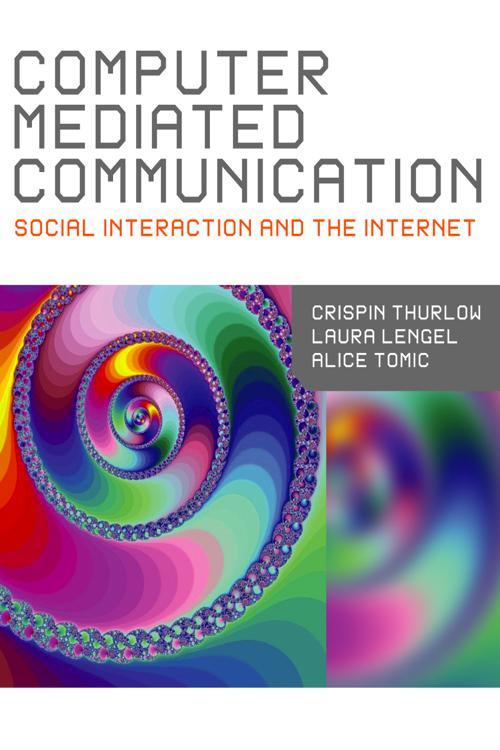 This book offers students a task-based introduction to Computer-Mediated Communication and the impact of the internet on social interaction. Divided into four parts which require students to learn, (theory), critique, (current issues), explore, (methods), and reflect, (practice), the book aims to:

In spite of the rapidly increasing interest in Internet Studies and CMC and the introduction of many university courses in the area, no specialised, introductory textbook exists. This coursebook responds to the need for such a text. Aimed primarily at communication students, this book would also be useful as a sourcebook for students of media, sociology, psychology and English Language Studies.

‘THE DEMOLITION OF SIMPLISTIC EITHER – ORS’

As the heading of this strand suggests, this first part of the book introduces you to some of the essential theoretical ideas in computer mediated communication. This is a way of introducing you to CMC as a field of scholarly study. While reading the units in Basic Theory we think it’s worth remembering from p. 4 the first of Pierre Bourdieu’s four pillars of intellectual life: the ‘demolition of simplistic either–ors’. What he means by this is that we should not oversimplify things and put them in binary opposition to each other – in other words, not judging things as either right or wrong, either good or bad.
We know that theory can be scary, but you’d be surprised at how much CMC theory actually connects with everyday communication and things you may already take for granted. After all, theory is just a way of trying to explain the world around us. Rather than making assumptions about what CMC is like, however, we do need you to learn some of the basics of what scholars have already discovered so that you are in a stronger position to critique the Central Issues, explore the Focus Areas, and apply all this knowledge in the Fieldwork tasks.
The book has been designed to allow you maximum flexibility in moving between different strands, units, topics and tasks. However, in laying a theoretical foundation and giving you the concepts you need in the rest of the book, each Basic Theory unit builds on the one that went before. Because of this, we recommend you follow the units in the order in which they are presented here.

DEFINING CMC: AN INTRODUCTION TO THE FIELD

WHAT IS COMPUTER MEDIATED COMMUNICATION?

Technically speaking, computer mediated communication (or just CMC as it’s commonly known) has been around since the first electronic digital computer was invented (some time during World War II), or at least since the first recorded exchange of prototype emails in the early 1960s. From these moments on, people have been communicating about, and by means of, computer technology. Either way, the history of computer mediated communication is little more than fifty years old. For most of us it’s hard to imagine a time when computers where not such an integral part of our lives, and it’s only really been in the last twenty years that computers have gone from being highly technical and specialist to being personal and popular.
If you’d like to find out more about the history of computers and the internet, we recommend you visit the US-based Computer Museum History Center [ BT1:1]. For a more detailed history of the internet, you could also look at the Internet Society’s account [ BT1:2].
Certainly, by the 1990s, personal computers had sprouted like mushrooms on the desks of office managers, schoolteachers, college students, doctors, home makers, and so on. Prior to the early to mid-1990s, however, academic interest in the way that people interacted with, and communicated through, computer technology was still fairly exclusive and restricted mainly to practical concerns such as information processing, data transfer, hardware design, and what is known more generally as Human-Computer Interaction (or HCI). However, it’s only really been since the mid-1990s that the fast-growing popularity and ubiquity of personal computers (especially for emailing, chatting and surfing the web) has caused CMC to become so attractive to scholarly attention. As odd as it may seem, it’s possible to regard CMC research and writing from the 1980s and especially 1990s as being ‘classic’ in the sense that this was an important foundation period when the scholars really started identifying the main topics of study and issues for debate in CMC. By being one of the first course books in the area, this book is itself just another stage in this gradual process of establishing CMC as a scholarly field.
So what exactly is it that we look at in CMC? This may seem like a pretty obvious question but it’s worth being clear about what we as the authors mean by the term right from the very start. Although in this book we will want to narrow our focus a little, the label ‘computer mediated communication’ essentially refers to any human communication achieved through, or with the help of, computer technology. For example, this is how Gerry Santoro (1995: 11) has put it:
At its broadest, CMC can encompass virtually all computer uses including such diverse applications as statistical analysis programs, remote-sensing systems, and financial modelling programs, all fit within the concept of human communication.
Or there is this slightly more enigmatic definition from John December (1997):
John December is someone who’s been associated with CMC for a long time, having founded and edited the widely cited website CMC Magazine [ BT1:3].
Computer Mediated Communication is a process of human communication via computers, involving people, situated in particular contexts, engaging in processes to shape media for a variety of purposes.
Yet another ‘classic’ definition is proposed by Susan Herring (1996: 1), a scholar who’s also been associated with the field for some time (see Central Issues: Units 4 and 5):
CMC is communication that takes place between human beings via the instrumentality of computers.
As well as looking to see how scholars define CMC in theory, another good way of learning what the term encompasses is simply by looking at scholarly publications to see what actually gets researched and discussed in the name of CMC. Especially with a relatively new field like CMC, it’s always worth remembering that all intellectual knowledge and all scholarly disciplines only ever exist by convention. In other words, we choose to label academic work in certain ways and we choose to pursue agreed-upon agendas of work. So, for example, we could say that psychology is what psychologists do; alternatively, psychologists are people who study psychology! For the most part, however, the field of psychology is very wide and defined in many different ways, depending on the particular interest of the individual psychologist concerned. Nonetheless, at the end of the day, to know what a field is about is really only to know what people who describe themselves as members of the field are actually doing.
It’s for this reason that, as far as CMC is concerned, one of the best places to start is simply by reviewing the wide range of topics covered in the Journal of Computer-Mediated Communication (JCMC) [ BT1:4] which was founded in 1995. For example, a quick look at its index shows the following kinds of themes:
Already you’ll notice that, by referring to terms like net, web and online, it’s not just any kind of computer technology and digital activity which is covered by the JCMC. In fact, another closely related academic forum for CMC researchers is the Journal of Online Behavior [ BT1:5]. Founded in 2000, JOB describes its field of interest much more clearly as follows:
The Journal of Online Behavior is concerned with the empirical study of human behavior in the online environment, and with the impact of evolving communication and information technology upon individuals, groups, organizations, and society.
We could go on by looking at any number of related journals, but instead we’ll show you just one more: Computers in Human Behavior [ BT1:6]. This is a journal which has been running for twenty years and focuses specifically on CMC from the point of view of psychology.
Computers in Human Behavior is a ...