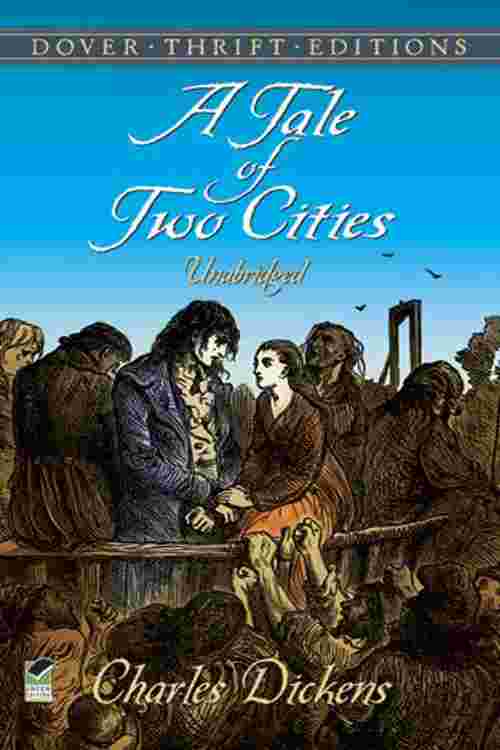 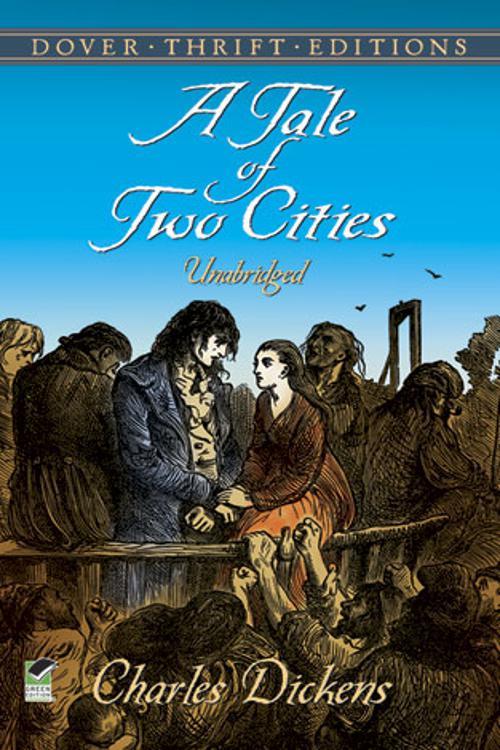 It was the time of the French Revolution — a time of great change and great danger. It was a time when injustice was met by a lust for vengeance, and rarely was a distinction made between the innocent and the guilty. Against this tumultuous historical backdrop, Dickens' great story of unsurpassed adventure and courage unfolds.
Unjustly imprisoned for 18 years in the Bastille, Dr. Alexandre Manette is reunited with his daughter, Lucie, and safely transported from France to England. It would seem that they could take up the threads of their lives in peace. As fate would have it though, the pair are summoned to the Old Bailey to testify against a young Frenchman — Charles Darnay — falsely accused of treason. Strangely enough, Darnay bears an uncanny resemblance to another man in the courtroom, the dissolute lawyer's clerk Sydney Carton. It is a coincidence that saves Darnay from certain doom more than once. Brilliantly plotted, the novel is rich in drama, romance, and heroics that culminate in a daring prison escape in the shadow of the guillotine.

“YOU KNOW the Old Bailey well, no doubt?” said one of the oldest of clerks to Jerry the messenger.
“Ye-es, sir, ” returned Jerry, in something of a dogged manner. “I do know the Bailey.”
“Just so. And you know Mr. Lorry.”
“I know Mr. Lorry, sir, much better than I know the Bailey. Much better, ” said Jerry, not unlike a reluctant witness at the establishment in question, “than I, as a honest tradesman, wish to know the Bailey.”
“Very well. Find the door where the witnesses go in, and show the door-keeper this note for Mr. Lorry. He will then let you in.”
“Into the court, sir?”
“Into the court.”
Mr. Cruncher’s eyes seemed to get a little closer to one another, and to interchange the inquiry, “What do you think of this?”
“Am I to wait in the court, sir?” he asked, as the result of that conference.
“I am going to tell you. The door-keeper will pass the note to Mr. Lorry, and do you make any gesture that will attract Mr. Lorry’s attention, and show him where you stand. Then what you have to do, is, to remain there until he wants you.”
“Is that all, sir?”
“That’s all. He wishes to have a messenger at hand. This is to tell him you are there.”
As the ancient clerk deliberately folded and superscribed the note, Mr. Cruncher, after surveying him in silence until he came to the blotting-paper stage, remarked:
“I suppose they’ll be trying Forgeries this morning?”
“Treason!”
“That’s quartering, ” said Jerry. “Barbarous!”
“It is the law, ” remarked the ancient clerk, turning his surprised spectacles upon him. “It is the law.”
“It’s hard in the law to spile a man, I think. It’s hard enough to kill him, but it’s wery hard to spile him, sir.”
“Not at all, ” returned the ancient clerk. “Speak well of the law. Take care of your chest and voice, my good friend, and leave the law to take care of itself. I give you that advice.”
“It’s the damp, sir, what settles on my chest and voice, ” said Jerry. “I leave you to judge what a damp way of earning a living mine is.”
“Well, well, ” said the old clerk; “we all have our various ways of gaining a livelihood. Some of us have damp ways, and some of us have dry ways. Here is the letter. Go along.”
Jerry took the letter, and, remarking to himself with less internal deference than he made an outward show of, “You are a lean old one, too, ” made his bow, informed his son, in passing, of his destination, and went his way.
They hanged at Tyburn, in those days, so the street outside Newgate had not obtained one inf...