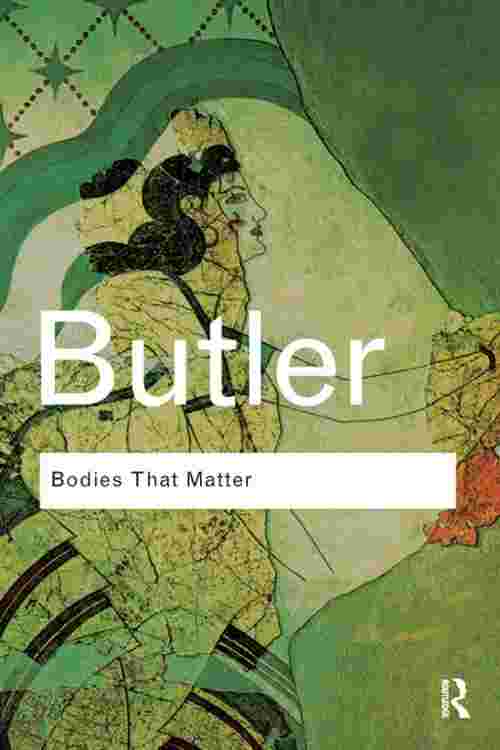 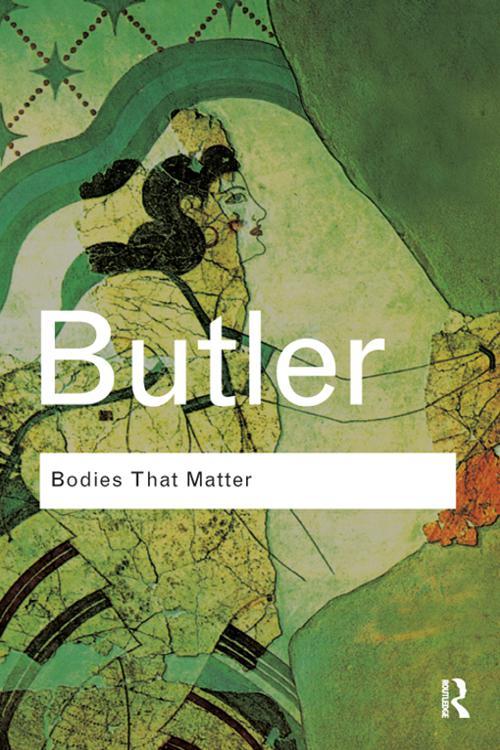 In Bodies That Matter, renowned theorist and philosopher Judith Butler argues that theories of gender need to return to the most material dimension of sex and sexuality: the body. Butler offers a brilliant reworking of the body, examining how the power of heterosexual hegemony forms the "matter" of bodies, sex, and gender. Butler argues that power operates to constrain sex from the start, delimiting what counts as a viable sex. She clarifies the notion of "performativity" introduced in Gender Trouble and via bold readings of Plato, Irigaray, Lacan, and Freud explores the meaning of a citational politics. She also draws on documentary and literature with compelling interpretations of the film Paris is Burning, Nella Larsen's Passing, and short stories by Willa Cather.

… the necessity of “reopening” the figures of philosophical discourse … One way is to interrogate the conditions under which systematicity itself is possible: what the coherence of the discursive utterance conceals of the conditions under which it is produced, whatever it may say about these conditions in discourse. For example the “matter” from which the speaking subject draws nourishment in order to produce itself, to reproduce itself; the scenography that makes representation feasible, representation as defined in philosophy, that is, the architectonics of its theatre, its framing in space-time, its geometric organization, its props, its actors, their respective positions, their dialogues, indeed their tragic relations, without over-looking the mirror, most often hidden, that allows the logos, the subject, to reduplicate itself, to reflect itself by itself. All these are interventions on the scene; they ensure its coherence so long as they remain uninterpreted. Thus they have to be reenacted, in each figure of discourse away from its mooring in the value of “presence.” For each philosopher, beginning with those whose names define some age in the history of philosophy, we have to point out how the break with material contiguity is made (il faut repèrer comment s’opère la coupure d’avec la contiguité materielle), how the system is put together, how the specular economy works.
—Luce Irigaray, “The Power of Discourse”

The classical association of femininity with materiality can be traced to a set of etymologies which link matter with mater and matrix (or the womb) and, hence, with a problematic of reproduction. The classical configuration of matter as a site of generation or origination becomes especially significant when the account of what an object is and means requires recourse to its originating principle. When not explicitly associated with reproduction, matter is generalized as a principle of origination and causality. In Greek, hyle is the wood or timber out of which various cultural constructions are made, but also a principle of origin, development, and teleology which is at once causal and explanatory. This link between matter, origin, and significance suggests the indissolubility of classical Greek notions of materiality and signification. That which matters about an object is its matter.4
In both the Latin and the Greek, matter (materia and hyle) is neither a simple, brute positivity or referent nor a blank surface or slate awaiting an external signification, but is always in some sense temporalized. This is true for Marx as well, when “matter” is understood as a principle of transformation, presuming and inducing a future.5 The matrix is an originating and formative principle which inaugurates and informs a development of some organism or object. Hence, for Aristotle, “matter is potentiality [dynameos], form actuality.”6 In reproduction, women are said to contribute the matter; men, the form.7 The Greek hyle is wood that already has been cut from trees, instrumentalized and instrumentalizable, artifactual, on the way to being put to use. Materia in Latin denotes the stuff out of which things are made, not only the timber for houses and ships but whatever serves as nourishment for infants: nutrients that act as extensions of the mother’s body. Insofar as matter appears in these cases to be invested with a certain capacity to originate and to compose that for which it also supplies the principle of intelligibility, then matter is clearly defined by a certain power of creation and rationality that is for the most part divested from the more modern empirical deployments of the term. To speak within these classical contexts of bodies that matter is not an idle pun, for to be material means to materialize, where the principle of that materialization is precisely what “matters” about that body, its very intelligibility. In this sense, to know the significance of something is to know how and why it matters, where “to matter” means at once “to materialize” and “to mean.”
Obviously, no feminist would encourage a simple return to Aristotle’s natural teleologies in order to rethink the “materiality” of bodies. I want to consider, however, Aristotle’s distinction between body and soul to effect a brief comparison between Aristotle and Foucault in order to suggest a possible contemporary redeployment of Aristotelian terminology. At the end of this brief comparison, I will offer a limited criticism of Foucault, which will then lead to a longer discussion of Irigaray’s deconstruction of materiality in Plato’s Timaeus. It is in the context of this second analysis that I hope to make clear how a gendered matrix is at work in the constitution of materiality (although it is obviously present in Aristotle as well), and why feminists ought to be interested, not in taking materiality as an irreducible, but in conducting a critical genealogy of its formulation.

For Aristotle the soul designates the actualization of matter, where matter is understood as fully potential and unactualized. As a result, he maintains in de Anima that the soul is “the first grade of actuality of a naturally organized body.” He continues, “That is why we can wholly dismiss as unnecessary the question whether the soul and the body are one: it is as meaningless to ask whether the wax and the shape given to it by the stamp are one, or generally the matter [hyle] of a thing and that of which it is the matter [hyle].”8 In the Greek, there is no reference to “stamps,” but the phrase, “the shape given by the stamp” is contained in the single term, “schema.” Schema means form, shape, figure, appearance, dress, gesture, figure of a syllogism, and grammatical form. If matter never appears without its schema, that means that it only appears under a certain grammatical form and that the principle of its recognizability, its characteristic gesture or usual dress, is indissoluble from what constitutes its matter.
In Aristotle, we find no clear phenomenal distinction between materiality and intelligibility, and yet for other reasons Aristotle does not supply us with the kind of “body” that feminism seeks to retrieve. To install the principle of intelligibility in the very development of a body is precisely the strategy of a natural teleology that accounts for female development through the rationale of biology. On this basis, it has been argued that women ought to perform certain social functions and not others, indeed, that women ought to be fully restricted to the reproductive domain.
We might historicize the Aristotelian notion of the schema in terms of culturally variable principles of formativity and intelligibility. To understand the schema of bodies as a historically contingent nexus of power/discourse is to arrive at something similar to what Foucault describes in Discipline and Punish as the “materialization” of the prisoner’s body. This process of materialization is at stake as well in the final chapter of the first volume of The History of Sexuality when Foucault calls for a “history of bodies” that would inquire into “the manner in which what is most material and vital in them has been invested.”9
At times it appears that for Foucault the body has a materiality that is ontologically distinct from the power relations that take that body as a site of investments. And yet, in Discipline and Punish, we have a different configuration of the relation between materiality and investment. There the soul is taken as an instrument of power through which the body is cultivated and formed. In a sense, it acts as a power-laden schema that produces and actualizes the body itself.
We can understand Foucault’s references to the “soul” as an implicit reworking of the Aristotelian formulation. Foucault argues in Discipline and Punish that the “soul” becomes a normative and normalizing ideal according to which the body is trained, shaped, cultivated, and invested; it is an historically specific imaginary ideal (idéal speculatif) under which the body is effectively materialized. Considering the science of prison reform, Foucault writes, “The man described for us, whom we are invited to free, is already in himself the effect of a subjection [assujettissement] much more profound than himself. A ‘soul’ inhabits him and brings him to existence, which is itself a factor in the mastery that power exercises over the body. The soul is the effect and instrument of a political anatomy; the soul is the prison of the body.”10
This “subjection,” or assujettissement, is not only a subordination but a securing and maintaining, a putting into place of a subject, a subjectivation. The “soul brings [the prisoner] to existence” and not fully unlike Aristotle, the soul described by Foucault as an instrument of power, forms and frames the body, stamps it, and in stamping it, brings it into being. Here “being” belongs in quotation marks, for ontological weight is not presumed, but always conferred. For Foucault, this conferral can take place only within and by an operation of power. This operation produces the subjects that it subjects; that is, it subjects them in and through the compulsory power relations effective as their formative principle. But power is that which forms, maintains, sustains, an...